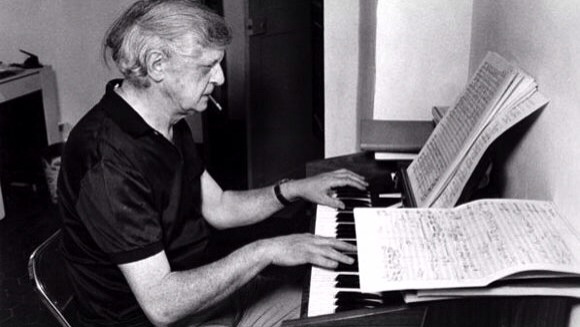 Whilst Anthony Burgess was known as a prolific author, journalist, translator, poet, critic and teacher, he was less known a lover of music, a musician and an accomplished composer.

Now an new exhibition starting this weekend will highlight the extent to which music influenced Burgess’s literary career and how his interest in music informed many aspects of his writing.

The display at the International Anthony Burgess institute on Cambridge Street will feature original hand-written manuscripts as well as an opportunity to listen to a number of his compositions and check out his Desert Island Disc selections.

Burgess wrote music across many genres and in many styles. His oeuvre includes symphonies, concertos, opera and musicals, chamber music including a great deal of work for solo piano, as well as a ballet suite, music for film, occasional pieces, songs and much more. As the conductor, composer and writer Paul Phillips has noted

On Friday Evening (28th Feb) there will be an opportunity to hear Burgess’s musical setting of T.S. Eliot’s masterpiece, the Waste Land, incorporating rarely seen pieces from the Burgess Archive.

A terrifying, moving, thrilling vision of modernity, The Waste Land is one of the most important and influential poems of the twentieth century, and Burgess’s extraordinary musical version illuminates and intensifies T.S. Eliot’s seminal text. Tickets are available at Skiddle.