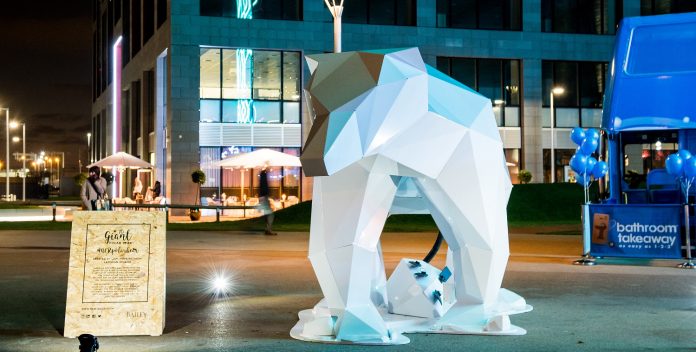 At more than three metres long, the illuminated bear was a focal point of the festive celebrations at New Bailey in Salford over the 2016 Christmas period. Eddie Powell, owner of The Sculpture Park in Surrey, is now custodian of the bear after having pledged £2,100 in support of homeless charity, Salford Loaves and Fishes.

Based on Mona Street in Salford, the independent charity run by volunteers is completely dependent on donations to continue its important work.

Project co-ordinator at Salford Loaves and Fishes, Sue Goodman, said: “Salford Loaves and Fishes provides a drop-in centre for homeless and vulnerable people in and around Salford and we are delighted to be the recipients of the money raised from the auction of the polar bear sculpture. This will help us to continue to provide vital services to those who are homeless.”

Commenting on the sale, Phil Mayall, development director at ECf, said: “The polar bear was a real highlight of our festive activities and we wanted to do something a bit different that could not only be enjoyed at Christmas, but have a longer lasting impact on the local community. It’s fantastic to see the project come full circle with the installation raising so much money for a such a worthy cause in Salford.”

The Salford Loaves and Fishes charity was chosen as the beneficiary of the funds raised, by ECf in consultation with Cllr Paul Longshaw, Lead Member for Housing and Neighbourhoods in Salford.

“The temporary public art installation was a great seasonal attraction for the city and it was such a fantastic way to raise some much-needed funding for Salford Loaves and Fishes”, said Cllr Longshaw.
“The charity is one of many similar organisations in the city that do such great work by helping people who are struggling to get by, and often have no place to call home. I cannot thank everyone involved enough.”

Located on the banks of the River Irwell, adjacent to Spinningfields, New Bailey is being delivered by ECF, a joint venture between Muse Developments, Legal & General and the Homes and Communities Agency, in partnership with Salford City Council.

New vision for greater independence for people with learning disabilities to be launched across...

G festival this weekend in Worsley