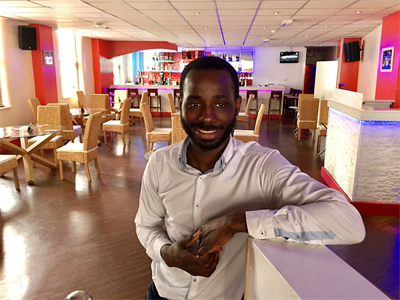 A former asylum seeker who fled war in his African homeland to create a new life in Wigan has spoken of his love for the people of the area as he opens an exciting new town centre business.

From there Obi and his family were moved to Wigan Borough where they put down roots in Hindley and established a new life.

With the help of the Hindley community the family secured asylum status and Obi has not looked back with a gritty determination to work hard and succeed.

Obi is now a proud owner of a new Afro-Caribbean restaurant and bar called D’Empire based in Wigan’s Wallgate and he is passionate about making it a success.

Obi told his story as part of World Refugee Day which takes place today  and in support of Wigan Council’s #BelieveImOnlyHuman campaign.

Obi said: “I have been brought up believing that to be successful you have to work hard. Things don’t come easy in life.

“Wigan has been amazing. Great people who have helped my family through hard times and now I’m happy.”

Obi’s commitment to work hard and better himself was clear from a young age.

After leaving Hindley High School he worked 15 hour shifts in a pizza shop on a Friday and Saturday so he had enough money to get the bus to college the following week.

At Wigan and Leigh College he studied IT, public services and business management and from there he worked in a recruitment agency.

When the recruitment agency couldn’t find suitable personnel for jobs Obi would often take on the agency shift as well – working in the recruitment office during the day and as a security guard at night travelling between the two on a bike!

He has spent 20 hours a day helping to refurbish the new restaurant and is now welcoming customers through its doors.

D’Empire has an Afro-Caribbean menu and DJs playing music in the evening.

“It’s something different for Wigan, something new,” said Obi.

“We aim to bring everyone from all cultures to D’Empire to have a good time and enjoy some good food.

“So I hope people come down and try it out.”

Obi praised his former youth group Rafiki run by Wigan Council for helping him to progress in his life and show him the opportunities that are available.

“It is amazing to see Obi living his dream with a new business and a great future ahead of him.

“Obi is a real role model for young people showing that hard work will pay off and is a great ambassador for the #BelieveImOnlyHuman campaign.”

Plans to improve the visitor facilities at Pennington Flash Nature Reserve in Leigh are...