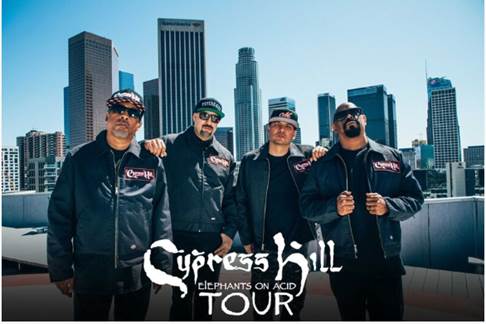 Multi-platinum hip-hop group Cypress Hill have announced a major UK tour this winter, their first in over two years.

Cypress Hill’s self-titled debut album came out in 1991 and sold over 2 million copies. They followed that with the release of the triple platinum album Black Sunday, which saw the group crossing-over to mainstream with their mega-hit “Insane in the Brain.” Being the first Latino-American hip-hop group to have RIAA Certified platinum and multi-platinum albums Cypress Hill is widely respected as one of the most important groups in Hip Hop history.

The Grammy nominated, record setting group has sold over 18 Million albums worldwide and is considered to be amongst the main progenitors of West Coast rap and Hip Hop in the early 1990s. With their debut album still at the top of the charts, they became the first rap group to have 2 albums in the top 10 of the Billboard 200 at the same time when their second album, Black Sunday, debuted at #1 on the Billboard 200 in 1993. “Black Sunday” also broke records as the highest Soundscan recording for a rap group up until that time.

2016 marked the group’s 25th anniversary and saw them release a limited edition of their ground-breaking debut album. Cypress Hill have also been in the studio and have plans to release music soon.

The band play Manchester Academy on the 30th November 2018

Tickets go on sale 09:00am, Friday 15 June via www.gigsandtours.com / www.ticketmaster.co.uk.

Richard Hawley at the Met