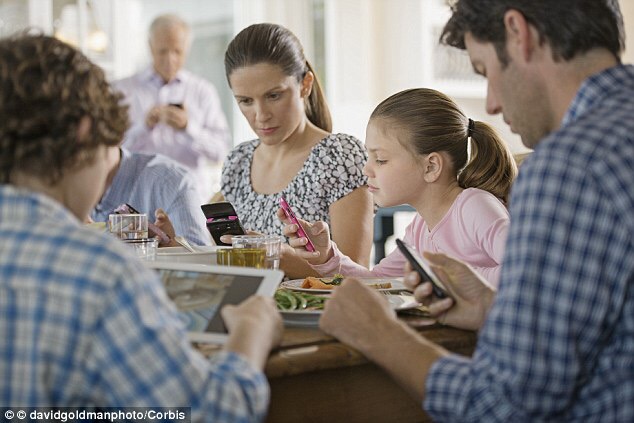 A generation ago evening mealtimes were a family affair. The dinner table was a gathering place for families to eat together and discuss the day’s events.
Hectic working lifestyles coupled with modern-day distractions such as mobile phones have caused the breakdown of family mealtime, with mums service tea up to three times a day.
In a recent study two thirds of the parents of children aged 3 to 16 admitted that as children they always sat at the dinner table as a family for their evening meal – and no other entertainment was involved.
Nowadays, more than half of modern families no longer sit down to dinner together on any week day.
Children tend to eat together in one sitting at around 5:45pm, while mum grabs a bite when she can – or hopefully catches a meal with hubby three days a week. But when the children do sit down to eat, only four in 10 make it to the kitchen table.

The McCain ‘Teatime Report’ showed a third of kids are served their tea on the sofa or in front of the television, while almost one in 10 eat in their bedroom.
Mark Hodge, Marketing Director at McCain, said: “Teatimes have changed considerably over the last 30 years.
“Everything from the time, location, to both mums and dads taking the lead to prepare meals – tea has evolved into a busy and hectic occasion that is often over in a flash.
“Whether it’s down to the rise of parent juggling different work schedules and infinite amounts of after school activities, we know mums have embraced the ‘controlled chaos’ of modern life.”
On the occasions families do eat altogether, a third will watch television at the same time, a further 11 per cent will listen to music, and the same percentage will be on the mobile phone – all instead of embarking on a conversation.
two thirds of the 2,000 parents of children aged 3 to 16 admitted that as children they always sat at the dinner table as a family for their evening meal – and no other entertainment was involved.
But the study reveals that modern families are accepting of the way things are now – with eight in 10 concluding they like the more relaxed approach to family mealtimes which fit in with their hectic lifestyles.
Indeed, a third of those polled admit staggering the family mealtimes is the only way to get everyone organised for the day, while 28 per cent claim tea has to fit in with the children’s numerous sporting events and after school activities.
According to 14 per cent of respondents mum tends to grab tea whenever she gets five minutes and 44 per cent say dad eats later due to long working hours.
A quarter of responsible parents simply want their children to eat earlier so they can go to bed at a respectable time.
Interestingly, only 16 per cent of parents claim they are having to serve up more than one meal due to their children being fussy about what they are eating.
The research also found that 71% of parents no longer have time to cook everything on the teatime plate from scratch.
However, today’s children are now exposed to a wider range of food types – as mums are serving up more diverse and exotic dishes as well as a wide range of vegetables.
And whereas as 30 years ago it would have been unheard of for dad to step foot in the kitchen, these days dad is more receptive to sharing the cooking when he is able.
Modern mums are serving up meals which provide a good balance of health and nutrition, but also which the whole family will enjoy.
Mark Hodge, Marketing Director at McCain, added: “McCain has been a favourite at family teatime tables for the last 30 years in the UK so we know teatime is where the good stuff happens.
“A generation ago evening mealtimes were a family affair. The dinner table was a gathering place for families to eat together and discuss the day’s events.