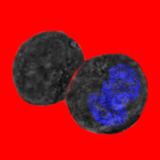 new insight into immune cells by scientists at The University of Manchester could lead to more effective drug treatments.

Professor Dan Davis and his team at the Manchester Collaborative Centre for Inflammation Research, working in collaboration with global healthcare company GSK, investigated how different types of immune cells communicate with each other – and how they kill cancerous or infected cells. Their research has been published in Nature Communications.

Professor Davis says: “We studied the immune system and then stumbled across something that may explain why some drugs don’t work as well as hoped. We found that immune cells secrete molecules to other cells across a very small gap. This happens when immune cells talk to each other and also, when they kill diseased cells. But crucially, some types of drugs aren’t able to penetrate the gap between the cells. So they can’t easily reach targets within the gap, to work effectively.”

The researchers took molecules of different sizes and colours and used microscopic imaging to see which size of molecule could get into the gap between an immune cell and another cell. They found that only the smaller molecules could penetrate the gap.

They even found that when an immune cell attaches to another cell it clears out all but the smallest molecules between them.

Professor Davis explains the significance of their findings: “Our research demonstrates that any drugs targeting immune cells need to be very small. Antibody proteins, for example, are too big and aren’t able to get into the gap between the cells – they’re even cleared away when cells meet. To make them more effective they must be smaller – something that GSK is working on.”

This research leads to new ideas for making drugs that, for example switch off immune activity in auto-immune diseases like diabetes or increasing immune reactivity to cancer. “A lot of important targets for future medicines are in the very small gap between cells. This research demonstrates why in certain cases we may need drug molecules to be smaller to work effectively,” said Simon Chell, from GSK’s Biopharm R&D team.

PhD student Adam Cartwright played a key role in the research, spending time at GSK as well as in Davis’s lab at the University of Manchester.

He says: “Being able to test out our theory with medicines that GSK has designed was fantastic. The idea that something I had found out can be used to develop treatments to help patients is incredibly exciting.”

Professor Davis, author of the popular Penguin paperback The Compatibility Gene, concludes: “The practical application of this basic research comes from bouncing around our ideas with scientists working on drug design. The interaction between academia and pharma is hugely beneficial and we hope it will lead to more effective drug treatments.”