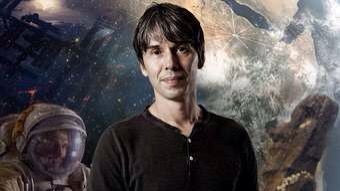 Professor Brian Cox on the origins of the universe,Trees of Codes and the Tales of Mr Tumble.

The first commissions for next year’s Manchester International Festival have been announced today with the first tickets on sale tomorrow.

The Age of Starlight will be a world first show about the origin of the universe and everything within and without it.

Brought to life by inventor Rony Abovitz and the team at Magic Leap, Professor Brian Cox will tell the story of the unlikely events that have led to our existence.

Directed by Oscar-winner Kevin MacDonald (Last King of Scotland, One Day in September), The Age of Starlight will feature computer-generated imagery created by Oscar-winner Tim Webber and Framestore, the VFX team responsible for the film Gravity.

The Festival is bringing together the choreographer Wayne McGregor, visual artist Olafur Eliasson and Mercury Prize-winning producer/composer Jamie xx to create a contemporary ballet inspired by the book Tree of Codes by Jonathan Safran Foer.

Meanwhile Justin Fletcher will be creating The Tale of Mr Tumble, a very special new show for children and their families in the glorious and intimate surroundings of Manchester’s Opera House.

This funny, moving and visually exciting show gives children the chance to see Mr Tumble live and up close as he tells his own improbable life story.

Audiences will find out exactly how he became the joyful entertainer familiar to so many, following his journey from bouncing baby Tumble (with his bright red nose already in place), through his singing and dancing school years, right up to the present day.

Mr Tumble will be joined by his friends and family including Grandpa Tumble, Justin and introducing Tootsie. Featuring songs new and old and a choir of Makaton signing stars.

200 made redundant as Manchester Construction Company Bardsley goes under