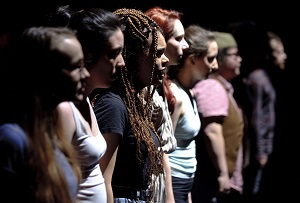 Buying a house, getting married and having a baby have previously been seen as measures of success in life and in society: Tangible evidence which supposedly says that having certain stuff by a certain age means “you’ve made it” But in 2019, are these markers still relevant or true?

Or are they now out-dated and unhealthy milestones that can no longer be trusted or respected to accurately represent what success means to a younger generation.

Created by the critically acclaimed in-house Contact Young Company (CYC) in collaboration with Amsterdam’s Theater Degestan , Baby Fever explores the relationship between milestones and mental health And – in response to the key theme of this year’s SICK! Festival of which the show is part – the young cast question, what is the value of a life when they no longer trust the world in which they live.

Devised through a series of workshops and discussions, fusing movement with monologues and physical theatre with performance, Baby Fever, is an intimate and interactive theatrical experience staged in parts by the company with their eyes closed with unconventional seating laid on for the audience.

Written, devised and developed by the talented and thought-provoking Contact Young Company – their ideas and their creativity have been honed , supported and directed by  Degasten – a leading Youth Theatre Company from Amsterdam whose principles align with those of CYC’s. Both companies exist to develop and nurture the talents of young people from all backgrounds and levels of experience to give training to and a vital voice and platform to the next generation of artists, actors, performers and writers.

Baby Fever is presented by Contact Young Company and Theater DEGASTEN . It runs at Stun Studio at Z Arts from Tuesday October 1 – Thursday October 3 at 7pm.

Classical Indian dance at the Lowry