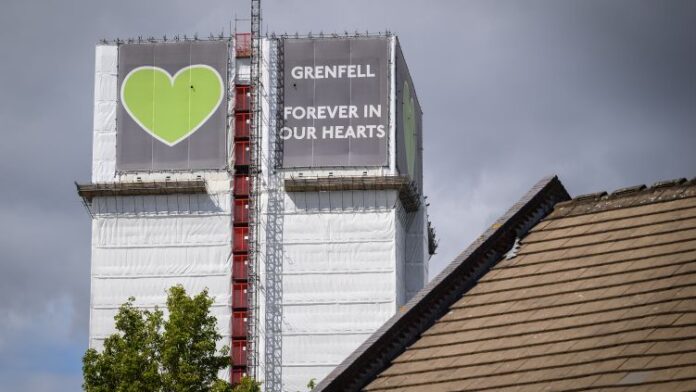 Four years on from the Grenfell Tower fire, leaseholders in apartments with flammable cladding are still suffering the fallout which is taking a huge toll on their mental health and wellbeing.

In the wake of the tragedy, buildings around the country have been identified not just with flammable cladding of the type used on Grenfell Tower, but a wide range of other fire safety problems, from flammable insulation, missing fire breaks and cavity barriers, to flammable materials on balconies and fire doors which do not meet specifications.

This has left leaseholders potentially facing bills of tens of thousands of pounds for repairs to their buildings.

A new study has been published, which interviewed leaseholders for the first time in the UK about the impacts the building safety crisis has had on their mental health and wellbeing.

It found that the threat of financial ruin now outweighed the risk of a fire for many still living in unsafe conditions, as property developers, managers and government grapple with who should be responsible for the costs of repairing unsafe buildings.

Dr Jenny Preece, from the UK Collaborative Centre for Housing Evidence at the University of Sheffield authored the study, she said: “In 2020, the Housing, Communities and Local Government Select Committee said the physical and mental health impacts of the building safety crisis were tantamount to ‘a public health crisis’. The Covid-19 pandemic has only intensified these negative impacts, and the longer leaseholders remain in limbo the worse the outcomes are likely to be.

“Speaking with those affected, our study clearly shows the widespread and severe impacts on leaseholders’ mental wellbeing. These impacts do not just exist today, but in some cases will fundamentally affect people’s lives for the long-term, even before any bills for remediation work have been received.”

Enquiries into the tragedy found that the rapid spread of the Grenfell fire around the outside of the building was fueled by exterior cladding and insulation that did not comply with proper building regulations; installed as a cost cutting measure during a recent renovation of the building.

After buildings nationwide were re-inspected, commonly occurring problems with sub-standard fire safety means many leaseholders are now facing potential financial ruin by property managers and freeholders who are seeking to recover costs for building repairs from leaseholders.

In the study, many report putting off life events such as retirement, starting a family, or moving for work, as they are awaiting the imminent threat of a bill through the door; with one leaseholder in Manchester being given an estimate of £120,000. Others are unable to move to care for family members in older age, trapped as they await certification of the materials used in the make-up of external wall systems.

Leaseholders described a spectrum of impacts to their mental wellbeing. These were exacerbated by living through the Covid-19 pandemic, which required individuals to spend more time in homes which were damaging to their health, and which had exposed some to greater financial insecurity due to changes in their employment. Leaseholders were fearful for their financial futures, and even without remediation works being undertaken many had seen increases in day-to-day costs such as insurance premiums.

Dr Preece said: “The uncertainty around when and at what cost the repairs in affected apartment buildings will be undertaken has effectively put people’s lives on hold, as well as keeping them trapped in homes that are damaging to their health. Managing this uncertainty and ‘not knowing’ whilst searching for answers as to why they are caught up in this crisis is damaging in itself.

“Financial devastation was seen as a very real and imminent danger, whereas a significant fire was viewed as much less likely. Even though not all participants had received a bill for repairs yet, commonly there had been an increase in costs for interim measures, which are already stretching leaseholders’ budgets and resulting in extra payments of hundreds or thousands of pounds a year.

“Many reported the stress and uncertainty of being caught up in the building safety crisis had taken away control over their own lives, as many of life’s big milestones are dependent on some level of financial security and the freedom to move. It’s incredibly hard to watch family and friends living their lives, whilst they are trapped, not able to move on with their lives and with no idea when this may be possible.

“Many leaseholders felt completely let down by government action to-date. It is now urgent that the government takes action to identify, prioritise and remediate buildings, commit to funding comprehensive repairs in all building types, and hold to account those who are responsible for this national scandal.”

Dr Preece said: “To move forward, leaseholders need to see clear and decisive action from the government and to have a timeframe in which they will be able to move on. Crucially, this must be backed up by comprehensive funding that is not limited by building height, and there must be a systematic attempt to hold organisations to account for failures that have been identified.

“The ad hoc approach that we have seen to-date is not working, and we quickly need new action to protect leaseholders from unaffordable remediation bills. There is a cost to doing nothing, not just to individual leaseholders in terms of their mental wellbeing, but to wider society as well.”

Dr Will Martin from the UK Cladding Action Group (UKCAG), which will be using the study data to lobby the Government for change, said: “Today’s report is a shocking indictment of the Government’s handling of the scandal to date. Four years on from Grenfell thousands of innocent leaseholders are mentally and physically exhausted by the constant threat to life that living in such buildings bring.

“Leaseholders are tired of false promises of help from a Government that still does not know the true number of affected buildings. Government has always said ‘leaseholders should not have to pay’ but the reality is that many face a constant barrage of entirely unaffordable bills, and in addition to paying through their pockets, this vital report lays bare the mental health costs faced by many on a daily basis.

“Leaseholders don’t want anymore ‘sticking plasters’, they want robust solutions to a problem they had no hand in creating, yet currently seemingly find themselves entirely responsible for.”