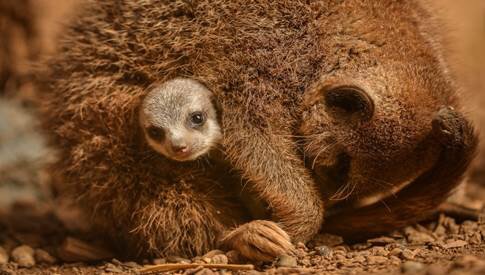 A lively quartet of meerkat pups have taken their first steps out into the sunshine at Chester Zoo.

The curious newcomers made their first public appearances after being burrowed away since being born on 11 June, following an 11 week gestation period.

Keepers at the zoo have not yet determined the sexes of the pups meaning each of the fantastic foursome has yet to be given a name.

“It’s great to have some lively new additions amongst our mob of meerkats. At only a month old it’s too early for us to confirm their genders but we’re pleased to say the pups are doing very, very well and are settling in nicely with the rest of the gang.

“They’re quickly learning how to forage for food and are spending lots of time grooming and playing together – activities which encourage the family to stay a really tight unit.”
Meerkats are native to South Africa, Namibia, Botswana and Angola and inhabit open country and sparse woody scrublands, feeding mostly on invertebrates.