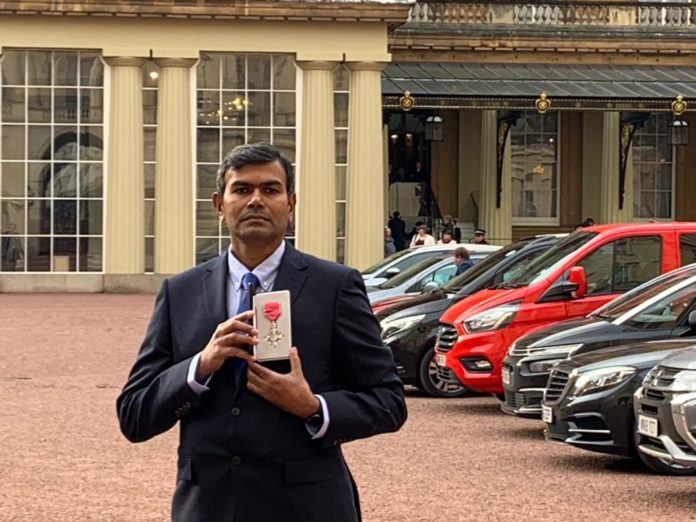 A Stepping Hill Hospital consultant has been awarded the honour of an MBE for his outstanding dedication and efforts following the Manchester Arena Attack of 2017.

Sengottiyan Chandrasekaran, an anaesthetic consultant known to colleagues as Dr Chandra, was in the foyer of Manchester Arena, waiting to pick up his 13 year old daughter from the Ariana Grande concert on the evening of 22nd May 2017, when the deadly terrorist bomb struck.

Thankfully Dr Chandra was not injured himself, and he straight away went about helping emergency services treat badly injured people at the terrible scene.

After he managed to find his daughter and her friend, and safely drop off his daughter off at home, he came straight into Stepping Hill Hospital in Stockport at 1.00am. Dr Chandra worked through the night in both the intensive care unit and operating theatres. The hospital had taken a number of injured people with major trauma as part of the Greater Manchester emergency services response that night.

The surgical teams said his work was “clinically excellent all night” while treating the injured and they had no idea what he had been through. He only mentioned at 6.00am to a colleague that he had been at the Arena that night, so close to the bomber.

National media covered Dr Chandra’s story amidst the coverage of the bombing, but his natural modesty meant that he did not give his name to the media, only now on receiving his MBE allowing it to be revealed for the first time.

Dr Chandra, 50, is from Cheadle Hulme in Stockport. He has been with the NHS for 21 years, and has worked as a consultant at Stepping Hill Hospital for 14 years. Stockport NHS Foundation Trust Medical Director Dr Colin Wasson said “Such outstanding efforts are truly in keeping with Dr Chandra’s attitude to his work, which has always been exemplary, performing excellently both as an individual clinician and as part of the wider team.”

Dr Chandra was awarded his MBE by Prince William, The Duke of Cambridge in the traditional ceremony at Buckingham Palace.

Dr Chandra said “I am truly honoured to receive this MBE, which I consider to be on behalf of all my colleagues. My thoughts are with people who lost their lives on that terrible day. I truly believe I was just doing my duty on that night, and my friends and colleagues in both the NHS and emergency services all rose to the challenge in these terrible circumstances too.”

Rochdale and Bury to receive £12m boost for flood defences

New £3m wing at Gorton Monastery is open for business