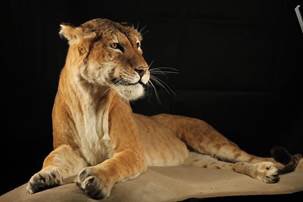 Nearly 80 years after she was first famous, people can once again admire Maude, a famous Tigon (a cross between a tiger and a lion) who was once the pride of Manchester’s Belle Vue Zoo.
Tigons are very rare, and this is the first one to go on display in a UK museum for around100 years. Maude was the most famous animal in Belle Vue Zoo in the 1940s, seen by enormous numbers of visitors from all over the country. When she died, in 1949, her skin was given to the Manchester Museum, part of The University of Manchester, but for some reason it was never prepared into a mounted animal. Now, she has been prepared by an expert taxidermist and can be admired in her full glory.

In the 1930s and 1940s, Manchester’s Belle Vue Zoo was home to two Tigons, a brother and sister that had been born in Dresden Zoo in 1932. Kliou, a male cub, and Maude, a female cub, were the offspring of a male Manchurian Tiger and an African Lioness.

They were brought to Manchester in 1936 by Gerald Iles, who managed Belle Vue Zoo. Kliou died in 1942 but Maude lived until December 1949. In a letter to the Museum from 1950, Iles wrote “During her lifetime here, Maude was always greatly admired and I would say loved by a very great number of our visitors. She was always quiet and good-mannered and always appeared to be perfectly groomed.”

After Maude died in 1949, Gerald Iles arranged for Maude’s skin to be preserved so she could go on display in Manchester Museum. Iles had studied Zoology at The University of Manchester, and gave a number of specimens to Manchester Museum. The skin was never mounted, but kept rolled up in a store. The recent taxidermy of the Tigon has been a very delicate operation due to the age of the skin. The taxidermist said that it had been both the most challenging and the most rewarding job of his long career.
Henry McGhie, Head of Collections and Curator of Zoology at Manchester Museum, said “Maude was far too beautiful and unusual an animal for her remains to be kept away in a storeroom. We want people to be able to admire her, and to hear more about the now-forgotten time when Manchester was home to such unusual animals. I hope that people will find her story as fascinating as we do.”