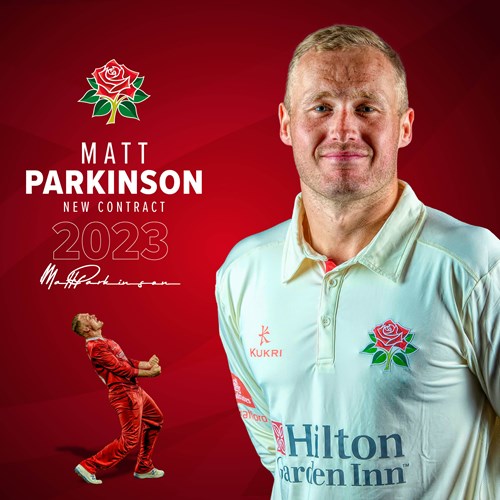 Lancashire Cricket have announced that leg-spinner and Academy product, Matt Parkinson, has extended his contract with the Club until at least the end of the 2023 season.

The 25-year-old has made 106 appearances for the Red Rose since making his First-Class debut against Warwickshire in 2016 – when he achieved a rare feat in becoming only the second English leg-spinner to take five wickets on debut in the post-war era.

The nine-time England international has become a key component in all three formats for Glen Chapple’s side and is widely regarded as one of T20 cricket’s most-feared spin bowlers, claiming 103 wickets in the format at an average of 17 and an economy of just 7.5.

In 2021, Parkinson enjoyed his most productive summer in red ball cricket taking 36 wickets at an average of just over 20, helping Lancashire to finish second in the LV= Insurance County Championship.

The Boltonian made headlines around the world, with his dismissals of Adam Rossington and Delray Rawlins drawing comparisons to another blonde-haired leg-spinner famous for sharp turn and bounce, in Shane Warne.

Parkinson has 11 international wickets to his name and has been included in England’s Test match squads for overseas tours of New Zealand, Sri Lanka and India but is yet to make his long-awaited red ball debut.

Speaking after extending his stay with Lancashire Cricket, Parkinson said: “It is a great feeling to know that I will be playing my cricket at Emirates Old Trafford for another two seasons and hopefully many more after that.

“The Club has shown great faith in me since my early days in the Academy as a 13-year-old and I hope that my performances in recent years have repaid their trust and will continue to do so.

“Last year felt like a real breakthrough season for me in red ball cricket and it was brilliant to be able to contribute to so many winning performances.

“We came so close to bringing a trophy back to Emirates Old Trafford last summer and I think with the squad we have built here and the hard work we are putting in, it is just a matter of time before we achieve something really special.”