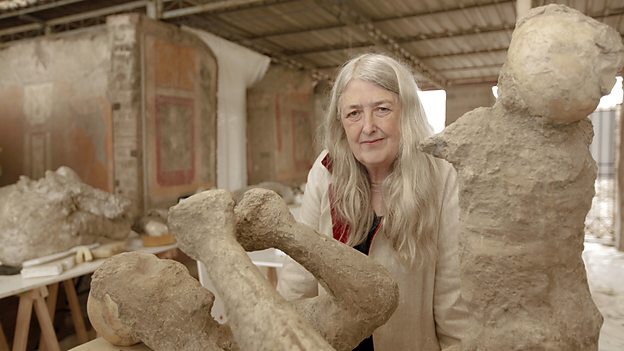 With unprecedented behind-the-scenes access to the Great Pompeii Project – an initiative to investigate and restore Pompeii – the one-hour special features cutting-edge modern technology to reveal what life was like in Pompeii 2,000 years ago.
Mary Beard, world Pompeii expert and author of Pompeii: Life Of A Roman Town, will be joining an international team as they bring the very latest technology to bear on this most extraordinary of archaeological sites.

Mary Beard says: “This is a really exciting chance to find out more about the ordinary people who lived in ancient Pompeii. It’s a once in a lifetime opportunity. I’m hoping we’re going to unlock some if the secrets about who the people were.”
For the first time, a team is CT scanning and fully investigating the world-famous casts of the bodies to analyse the skeletons trapped within, to ascertain all they can about who they were, where they came from and how they lived. A team is also conducting DNA analysis of the bodies for the first time.
Elsewhere, the documentary will follow the work of recovering damaged frescoes and mosaics, the excavation and rebuilding of certain key buildings and the organisation and cataloguing of the thousands of astonishing artefacts in the storerooms – from loaves of bread to pet monkeys, paint pots to purses.

It will shine a light on the work of archaeologists who are exploring the third of the town that has never been excavated, and will present a unique first look at the complete Pompeii in stunning CGI.
Using the evidence gleaned from all this research, the BBC One film will piece together a full picture of daily life in Pompeii before the town was destroyed by the eruption of Vesuvius in AD79.

Martin Davidson, Head of Commissioning for Specialist Factual at the BBC, says: “I am delighted to bring Pompeii alive for BBC One audiences; with unique access to parts of this amazing city not usually seen by the public, expert historian Mary Beard will reveal what day-to-day life was like for residents of Pompeii and, in doing so, shed a fascinating light on just what it was like to live in the Roman Empire.”
Executive Producer Richard Bradley says: “It is a real thrill to be telling the story of Pompeii with Mary Beard. The Great Pompeii Project is a remarkable, once-in-a-generation initiative – and it is a privilege to be allowed behind the scenes to see the experts conduct the detective work in action. The work the experts are undertaking on the casts, the buildings and the artefacts is truly amazing, and it will enable us to take the viewers to parts of Pompeii they are never normally allowed to see.”

Rillington Place – BBC dramatisation of story that shocked the nation