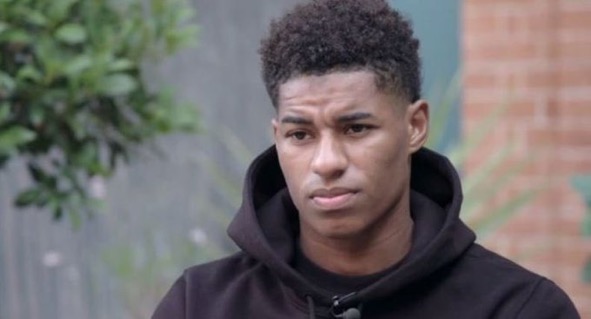 Manchester United and England striker Marcus Rashford Marcus Rashford has announced that he is to form a Child Food Poverty Task Force with supermarkets and food brands.

“4.2m children were living in poverty in the UK prior to Covid-19 and this is expected to have risen. The time for action is now.” writes Rashford as he calls on the Government to expand the free school meals programme to every child between seven and sixteen reaching a potential additional one and a half million children

Rashford was credited as playing a key part in forcing the government to U-turn in June on its decision not to extend the children’s food voucher scheme into the summer holidays.

In a letter to all MPs, the sportsman explains how extending the food voucher scheme impacted millions of children’s lives, and how parents “cried with sheer relief that putting food on their children’s plates was one less thing to worry about this summer”.

But he warned this was only a short-term fix and school closures, redundancies and furloughs have added to the crisis.

As well as expanding the free meals programme he also is calling for the expansion of holiday provision (food and activities) to support all children on free school meals, reaching an additional 1.1million children and to increase the value of the Healthy Start vouchers to £4.25 per week (from £3.10) and expanding into all those on Universal Credit or equivalent, reaching an additional 290,000 pregnant women and children under the age of four.

Speaking to BBC Breakfast this morning Rashford said the move was a “short-term solution” to stopping children from going hungry, but it “wasn’t going to work in the long run”.

Sale comes fourth in top places to live in England