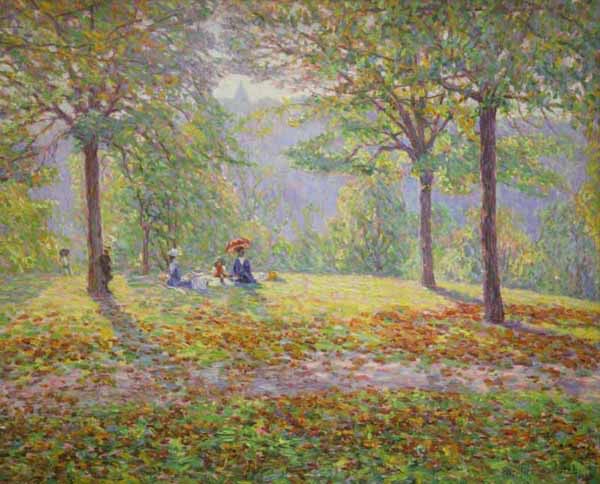 A new exhibition at Manchester Art Gallery is celebrating the life and work of a painter once described as Manchester’s version of Monet.

Wynford Dewhurst: Manchester’s Monet, is the first  retrospective of the English impressionist painter and art theorist since his death in 1941, and  includes many works that have not been on public display before.

Dewburst was a controversial figure on the Anglo-French art scene at the turn of the twentieth century, most famous for his 1908 work The Picnic, in the collection of Manchester Art Gallery.

He was born in Newton Heath in 1864 and began his career studying law.

He moved to Paris at the relatively advanced age of 27 to train as an artist, returning to France throughout his life to paint in the valleys of the Seine and the Creuse in the style of Claude Monet, who became his principal mentor.

The exhibition brings together a large selection of Dewhurst’s shimmering paintings with contextual material to reintroduce the painter to his native city.

Dewhurst’s pictures take their cue from Monet, but they surpass the efforts of an acolyte. His vision is of a glowing, dense ether from which cliffs and castles emerge solidly, glowing as if lit from within.

Although from Manchester, Dewhurst’s affinity was with French landscape and the bright light of the continent.

His views have the archetypal Impressionist quality of appearing in the gallery like windows on to a sunlit world, the purple hills warm and inviting in the distance.

Dewhurst was an art theorist as well as a painter and his 1904 book Impressionist Painting, Its Genesis and Development was the first important British study of Impressionism.

The book became notorious for Dewhurst’s insistence that the English landscape tradition, especially the work of John Constable and J. M. W. Turner, was at the root of modern.

French painting. Dewhurst’s thesis was that, ‘the French artists simply developed a style which was British in its conception.’

The independent curator of the exhibition, Roger Brown, has researched the life and work of Wynford Dewhurst for the past five years.

A fully illustrated book authored by Brown will be published by Sansom & Company to accompany the exhibition.

It will be the first monograph to be written on this influential artist and writer.

This exhibition puts the two works by Dewhurst in Manchester Art Gallery’s collection into context with significant loans from private collections which have not previously been seen in public.

They range from works from his students days through to post World War One, including many paintings when he was at the height of his powers between 1900 and 1910. The exhibition will be accompanied by a full programme of events

The exhibition runs until the 23rd April 2017