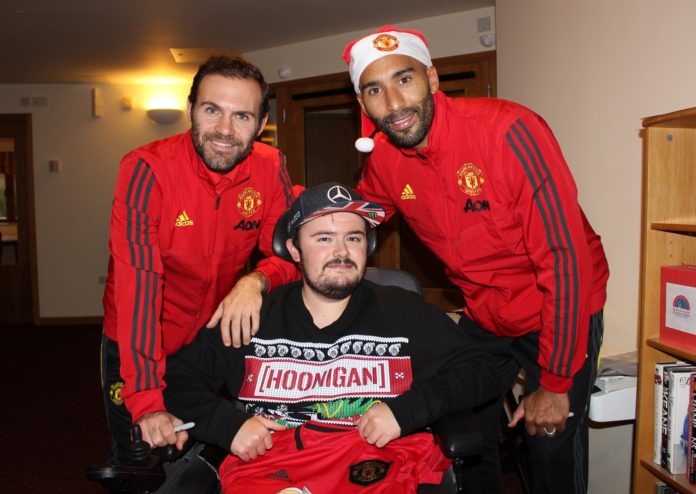 The Manchester United first-team squad visited poorly youngsters in hospitals around Greater Manchester and the hospice in Didsbury.

Juan and Lee met with a group of children, their parents and siblings in the family lounge in Francis House and heard how the hospice supports them with respite care.

“It was really nice of the players to give their time at Christmas to come and meet us,” said their mother Jenny.
“As the sibling of a poorly child, Ricardo can sometimes get left out, so it was really nice that he had something fun that he could do today. Florence really took to Lee and went to give him a big hug which was lovely,” she added.

The players then moved into Francis Lodge, the teenage and young adult wing at the hospice, where they were greeted by more than a dozen young people and hospice staff.

Among then Josh Slack said: “It was lovely to meet the players, they made sure they chatted to everyone and Juan Mata was such a lovely guy.”

After his time at Francis House, Mata said: “I think it is important to give back at any time, but now it’s Christmas and obviously it’s a very important time for a lot of us and our families, so we are grateful to be able to help kids that are not able to have the happy Christmas that we normally have.”

Grant said: “It was an honour to meet the children and families and be part of sharing some time with them today.”

Francis House supports more than 500 families from across Greater Manchester. The hospice services are all given completely free of charge and include respite care, homecare, sibling support, end of life care, emotional and bereavement support.

The hospice needs to raise £12,900 a day in donations to continue to provide long-term support to the children, young people and their families.

Forever Manchester helps bring together over 10,000 people in the communities during the festive...