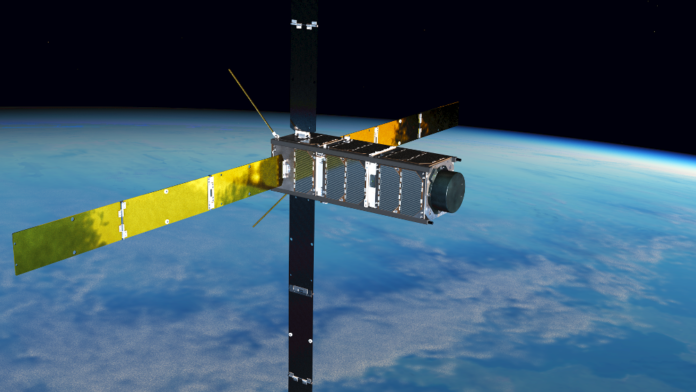 Technical advances made through The University of Manchester led DISCOVERER project to create new generation satellites capable of operating at a lower orbit have been honoured at The Engineer’s Collaborate to Innovate (C2I) awards.

DISCOVERER is a Horizon 2020 funded project led by Manchester and involving eight industrial and academic partners – is driving the development of a range of technologies that could enable satellites to do just that, allowing them to operate at altitudes below 450km, in Very Low Earth Orbits (VLEO).

Remote sensing satellites currently operate at about 500-800km above the Earth, above the residual atmosphere that exists at lower altitudes. But this means that observations of the ground must also take place over this range, either limiting resolution or requiring large telescopes to be used.

Project leader Dr Peter Roberts, said: “Molecules travel kilometres before they hit another gas molecule which means all of the aerodynamics is driven by individual gas molecules interacting with the satellite surface directly. It then becomes an issue of surface chemistry and physics, with those molecules hitting the surface, how they translate momentum into it and how they’re scattered off.”

The advent of lower orbit operating satellites could bring a range of benefits including reduced latency for communications satellites; improved imaging resolution for remote sensing systems and an ability to use much smaller payloads, thus reducing launch costs. Use of lower orbits could, also make it easier to recover satellites at the end of their operating lives, ensuring they don’t add to the growing problem of space debris.

The C2I awards, now in their sixth year are run by The Engineer. The awards were established to uncover and celebrate great examples of technology-led engineering collaboration across a range of different disciplines and sectors. This year the DISCOVERER project was among the winners in the aerospace and defence category.

Although the challenges in developing low-orbit satellites are significant, the multidisciplinary team – which brings together physicists, chemists, materials scientists, and assorted experts in space flight and satellite design – has already made a number of key breakthroughs.

Aerodynamic materials are key to DISCOVERER with a large portion of the work has focussed materials that are resistant to erosion in VLEO. Material developments have focussed on Such materials, combined with appropriate satellite geometries, can significantly reduce drag whilst also generating usable aerodynamic lift to enable aerodynamic attitude control. Developments here have focussed on 2D, beyond graphene materials for which Manchester University has a patent pending.

The DISCOVERER team has already overcome many of the key technical obstacles to sustained operation of satellites in VLEO. Roberts claims that the development and commercialisation of technologies that enable satellites to operate in VLEO could be key to helping the UK deliver on its stated ambition to capture 10 per cent of the £400bn global space market by 2030.