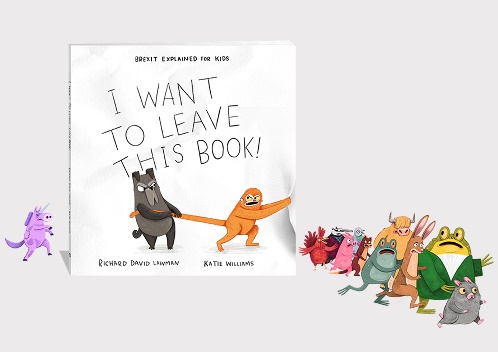 The UK’s first children’s story book dedicated to Brexit has launched after new research revealed that a third of UK parents (32 per cent) would not be able to explain Brexit to their children if asked.  It will be released at 11pm on Thursday 31 October 2019.

Created by Manchester-based publisher, WatAdventure, the book is the brainchild of the company’s author, chief creative officer and father of two; Richard David Lawman and it was illustrated by Katie Williams. The impartial picture book, titled ‘I Want to Leave this Book’, tells the story of Brexit using a colourful cast of animals playing the part of some of the UK’s leading political figures.

The book has been published after research of parents revealed that 70 per cent of children were aware of the term Brexit, yet only a quarter (27 per cent) of parents could give their child a detailed explanation of the UK’s divorce from the EU if asked. A further eight per cent admitted that they were too baffled by Brexit themselves to explain it to their offspring.

The 32-page book, which has been written as an allegory, (a story with two layers of meaning like George Orwell’s Animal Farm), cleverly works on two levels, bringing the key moral standpoints of Brexit to the fore in a way that children will clearly understand. Parents may recognise David Cameron, played by Percy Hogtrotter the pig; Theresa May, played by Hamster and Boris Johnson, played by Highland Cow.

It also features a Brexit explainer section and glossary to help parents explain the key terms to their children.

Author, Richard David Lawman, said: “As a father to an inquisitive four-year-old, I started to think about how I would explain the current political landscape to my daughter and the answer was, I couldn’t.

“I Want to Leave This Book is the answer to my dilemma – and clearly one that parents across the UK are facing. The book puts Brexit into a child-friendly context with a cast of animals debating whether they are better off staying in the book, or if more fun and adventure awaits them in another. After they vote to leave they can’t agree on what type of book they want to be in and arguments and chaos quickly ensue.

“But first and foremost, we wanted this book to be fun to read even without the Brexit context.”

“I really hope that this book provides an entertaining and informative tool for parents to explain Brexit to their children – it is certainly something I will be reading to my little ones.”

‘I Want to Leave the Book’ is priced from £9.99 and is available to pre-order now from https://shop.watadventure.com/.

Numerous flood warnings after unprecedented rainfall across the region