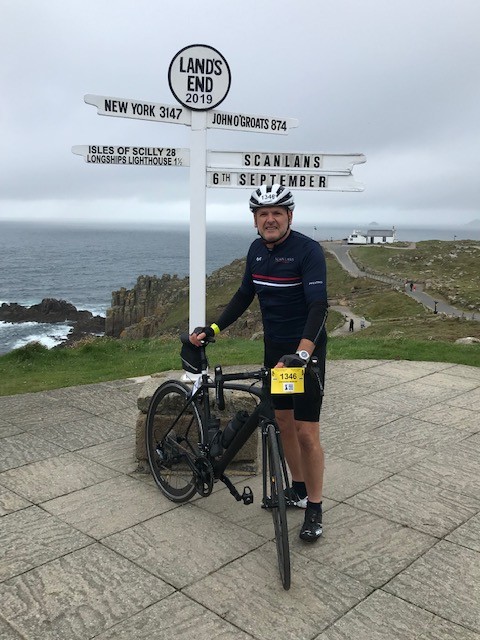 A partner at property management and surveying firm Scanlans has raised nearly £2,500 for Parkinson’s UK by cycling the length of Britain.

The 53-year-old undertook the marathon ride for Parkinson’s UK because his sister Raffaela suffers from the disease.

He said: “Seeing my sister gradually deteriorate and being helpess to prevent it spurred me to raise money for Parkinson’s UK as my way of saying thank you for its amazing work alongside that of the NHS.”

Tony, a building surveying partner in Scanlans’ Manchester office, is a member of Clitheroe Bike Club in Lancashire and began training in earnest for the ride in January.

He said: “I had to get used to spending long hours on a saddle, building up my miles gradually.

“Due to work and life commitments, I often went out at 4.30am when the roads were quiet, but living in the hilly Ribble Valley provided the perfect backdrop for my training.”

Tony added: “I’d not undertaken anything like this ride before and it was a bit daunting, but it proved to be a great experience and one that I will never forget.

“I’m really glad I did it, and would do it again in the right circumstances.

“The organisation and the set-up was absolutely top-drawer and there was fantastic camaraderie between the riders, with everyone encouraging each other and helping one another along the way.”

Nearly 1,000 riders took part in the event, with a similar number of support staff along the route.

Tony said the hardest part was the climb up The Lecht near Aberdeen, which has a gradient of more than one-in-five in places.

Donations to Tony’s fundraising efforts can be made via https://justgiving.com/fundraising/anthony-mancini