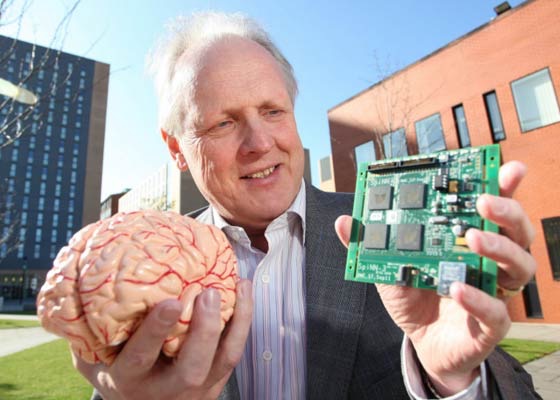 Steve Furber, ICL Professor of Computer Engineering at The University of Manchester, has been announced as the joint winner of a prestigious award by the Royal Society. Their annual prizes recognise exceptional scientists who are engaged in challenging research to open up new possibilities and new applications.
The Mullard Award, which recognises outstanding scientific work which has aided the national prosperity of the United Kingdom, has been given to Professor Furber and Sophie Wilson for their distinguished contributions to the design and analysis of the Acorn RISC Machine (ARM) microprocessor in the 1980s, which is now used in mobile phones and other portable electronic devices throughout the world.

The microprocessor has influenced the everyday life of most people through its use in electronic products of all sorts. It is also used in cars, TVs, disk drives and printers.

The contribution of Furber and Wilson at Acorn was to put the fundamental research into commercial practice. The impact of that work is still growing, over 30 years later.

Professor Furber said: “I am very excited and honoured to be given this award by the Royal Society, which recognises the contribution that Sophie and I made in the early 1980s in sowing the seeds of ARM technology. It has been very rewarding to watch that technology grow and flourish – thanks to the efforts of many thousands of people – into a UK industrial success story that touches the lives of everyone on the planet today.”

Professor Furber is also currently contributing to the Human Brain Project, a venture involving more than 100 universities and research centres across Europe which has launched a range of prototype computer platforms to support brain research. His particular platform – SpiNNaker – is being used to accurately model areas of the brain, and to test new hypotheses about how it works.

Watch out Storm Hector is on the way