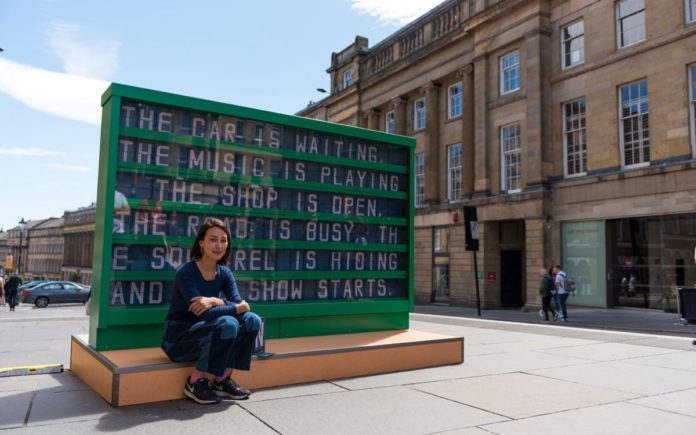 In the digital age, data surrounds us, nowhere more so than in our cities. What kind of stories can urban data tell about a city, its citizens and its visitors? Would we perceive our surroundings differently if we could experience this data in a different form?

Harnessing public art to explore the ‘Smart City’, Matsuda’s Every Thing every Time broadcasts poetry on a large mechanical display, urging deeper reflection on the role of data in our lives, personal privacy and our place in future cities.

Curated and Produced in Manchester by FutureEverything, Every Thing every Time tours to South by Southwest with British Underground’s Future Art and Culture Programme.

In a North American premiere at South by Southwest 2019 (SXSW), artist Naho Matsuda’s public realm artwork processes data typically captured and published by ‘smart city’ technologies, consumer devices, private and public institutions, and various media, using this data to create poetry based on your interaction with the urban environment.

Through careful curation of data that describes events, from the mundane to the marvellous, life in Austin will be expressed as poetry on a mechanical split-flap display resembling the destination boards once found in railway stations.

Delving into the expanding scope of data collection and the ‘smart city’, the work invites audiences to reflect on our increasingly complex relationship with technology and the global phenomenon of ‘surveillance capitalism’.

On touring the work to South by Southwest, Naho Matsuda says:

“In Every Thing every Time I turn data streams into poems. The work interrogates where data comes from, who owns it and how it’s used. South by Southwest is the work’s first international showcase, so I’m very excited to see the stories generated from Austin’s data.”

“We’re very excited to bring Every Thing every Time to South by Southwest. Having developed this artwork in Manchester with Naho and industry partners, the opportunity to tour the work with British Underground was unmissable. We hope that presenting the work in Austin leads to opportunities in other cities.”

“Naho Matsuda’s Every Thing Every Time, in Austin’s Brush Square is an important addition to our Future Art and Culture programme at South by Southwest and brilliantly showcases how public data and digital technology can be utilised to make great art.”

Earth’s inner core is much younger than we thought