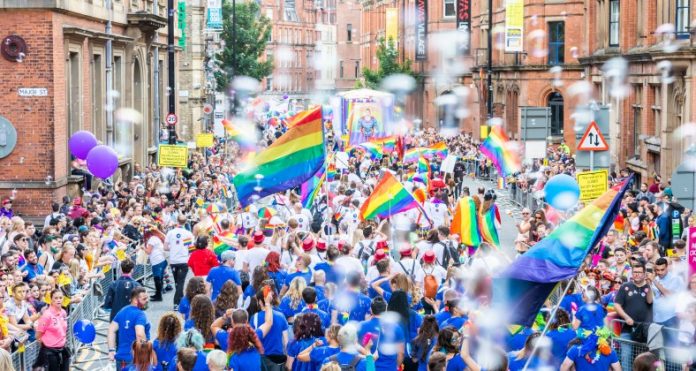 The theme for IDAHOBIT this year was Breaking the Silence and with this in mind the Superbia Spotlights Series aims to reduce social isolation and support artists in the creation of work to connect communities that need it even more than normal in the face of the Covid-19 pandemic.

The programme, which will be funded by Arts Council England, is vital for the charity to continue to support LGBTQ+ artists and art organisations and provide content for the audiences and community that would normally attend and engage with the Superbia programme. All of which have been affected by the impact of the COVID 19 Pandemic on the charity, in particular because of the postponement of the 2020 Manchester Pride Festival.

The programme will consist of three tiers of activity. Firstly the charity plans to support 10 LGBTQ+ artists to create small digital commissions – three of which will be chosen following an open submission which will launch in the coming months.

Secondly the charity will commission three medium scale pieces of work. The first will be Making Trans Works which will be supported by Trans Creative to provide trans theatre makers with a series of free online sessions to help them in the creation of future solo pieces.

The Bunker at Plan B will see a BAME LGBTQ+ co-operative of seven artists deliver creative work and free workshop resources across dance, poetry, painting and theatre making.

Plus lesbian artist and PhD student Sarah-Joy will also deliver a digital textile show. The Superbia support will enable Sarah-Joy to create her first solo show which will be participatory including live artist collaborations, lectures, in-conversations, image galleries and writing. A digital hub will be set up by Sarah-Joy and her collaborators enabling artists and individuals to develop and express their own creativity.

The third tier to be funded by Superbia will be the research and development phase of a larger project with Wigan based artists AL and AL who have created an award winning body of visionary work which has been exhibited internationally in over 50 countries.

The artists are the creative vision behind Wigan’s extraordinary five year plan The Fire Within. The work, which it is hoped will launch nationally after the lockdown, celebrates the amazing story of Allan Horsfall, his quest for gay equality launched the isolation of a miner’s cottage in Wigan in 1965. The project will recreate copies of the 10,000 leaflets that Allan distributed, publishing his name and phone number, campaigning for the legalisation of homosexuality and inviting gay men to write to him.

These original pieces will contribute towards Arts Council England’s ‘A Creative & Cultural Country’ helping to develop a professional sector of inclusive, inspired and imaginative LGBTQ+ artists. The organisation recognises that there are sectors of the LGBTQ+ community that face additional barriers to art and culture and these projects are designed with the reduction of these barriers in mind.

Mark Fletcher, chief executive for Manchester Pride, said; “It is of utmost importance to myself and my team that at a time of huge stress and worry for LGBTQ+ people everywhere we are able to continue to support the communities that need us. In postponing the Manchester Pride Festival until 2021 the charity is going to face greater pressures financially, so grants such as this one from Arts Council England are absolutely vital.

“The arts and culture work that we have delivered through Superbia over the last three years has enabled us to build rich relationships with LGBTQ+ artists and shine a light on some of the very best talents we have in Greater Manchester. We know that this work, often with minorities within our communities, touches and enriches lives of LGBTQ+ people across the ten boroughs.

“From the small commissions for new artists to the huge undertaking of the activity in Wigan we will support communities that have been marginalised and bring them to the fore. We know that more than half of all black, Asian and minority ethnic LGBTQ+ people have reported experiencing discrimination or poor treatment within their local LGBTQ+ network because of their ethnicity and almost half of trans people have attempted suicide at least once and 84% have thought about it. I hope that this work will go some way to giving these people voices that will empower them and show the wider community how much they have to offer.”