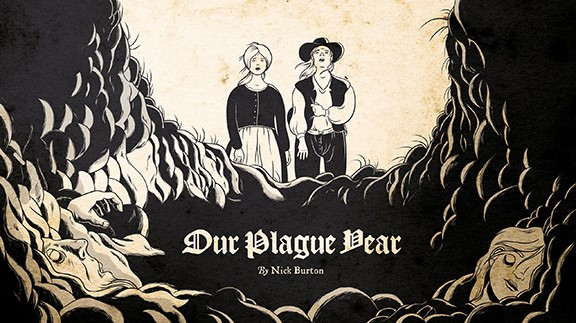 A WEEKLY comic strip by artist and illustrator Nick Burton, and distributed by Manchester arts centre HOME, will explore self-isolation and human behaviour through the lens of the effect of the bubonic plague on the Derbyshire village of Eyam in the 17th century.

Conceived and created by Burton in response to a provocation by HOME’s curator Bren O’Callaghan, Our Plague Year is an alternative retelling of life in Eyam in 1665-66, when the local community made the decision to quarantine themselves to prevent the Plague from spreading to their neighbouring towns and villages.

The series will be made available on HOME’s website every Friday from May 29, with email subscribers able to receive the latest strip two days early, on a Wednesday.

Nick is an illustrator and storyteller living in Manchester, England, who works on both personal and commercial projects. His comics and illustrations have been featured in Wired, The New York Times, Ride Journal, GQ and more. Nick’s recent comic tale of a lost bicycle, Lily (told from the perspective of the bicycle), was a finalist in the recent Manchester Open Awards 2020 at HOME.
“Our Plague Year will be significantly different from the true story of the Eyam Plague,” Nick explains.

“It’s set in Eyam. It’ll roughly look like Eyam, and it’ll follow the timeline of the plague in Eyam. But I’m using wholly fictional characters to tell the story. And characters who are not necessarily as selfless as the historical ones we know about.

“From a modern-day perspective, I’m watching what’s going on around the world with regards to Covid-19 with a particular interest on how people from different parts of society are reacting to what’s happening in their community. Some people accept what’s happening, while others rail against it.

“People are generous, people are selfish, some just want to get back to their lives, while others are reconsidering their lives. People are happy. People are angry. People are sad. And it’s probably not much different to how people have always reacted during times of crisis. I want to take these (today’s) reactions and layer them over a similar event from 350 years ago.”

Although inspired by real events during 1665-1666 in Derbyshire, England, Our Plague Year is a fictional, contemporary narrative, drawing a connection between historical pandemics, aggravated by misinformation, fear and discrepancy of wealth. It fuses the self-fulfillment of the ‘me generation’ with a moral appeal for greater social responsibility; less polar opposites than a push-and-pull in which the unfolding tittle-tattle of village citizens prompt us to question where we might stake our own allegiance, should we wake up in the 17th Century in a world defined by a ring of boundary stones.

The cast of characters are broad and diverse, challenging received histories of the period – from nonwhite British citizens, to deaf and disabled characters. Essential needs are re-evaluated, not simply food and medicine, but friendship, desire and inequality. The seemingly imbalanced duo of spoilt-little-rich-girl Godelena Berrycloth and her meek sidekick, Edith Webster, is more symbiotic than at first appears. Wise woman Granny Dankworth, whose prophecies are ignored, speaks a muddled truth but holds no authority within the village hierarchy. Village gossip, George Gribble, blames the fairies for all misfortune, while young Godfrey Berrycloth, confined to a wheelchair from a young age, is perhaps best positioned to ride out the inconvenience – his rich interior world within a moment’s reach.

“The disappearing format of the weekly comic strip has many of similar qualities to an evolving soap opera, which in the UK often tend to offer a litmus test of the prevailing social climate,” says HOME Curator, Bren O’Callaghan. “Just as a satirical cartoon can cut to the quick of a complex topic, I believe Nick’s alternative-universe of a reimagined Eyam will allow us to explore many nuanced and complex emotions that arise in our own current reality.”

Manchester Jewish Museum gives audiences a “flavour” of what to expect in the new...