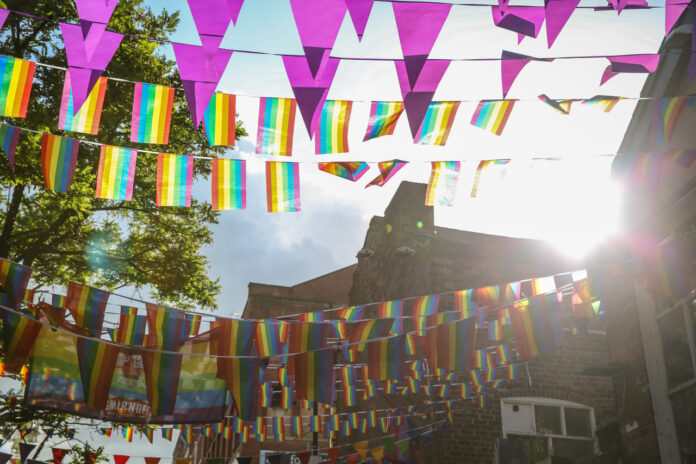 Last week LGBTQ+ charity Manchester Pride announced that it will deliver three days of virtual celebrations for LGBTQ+ people in Greater Manchester over the August bank holiday weekend in a bid to reduce the impact of social isolation through celebration.
Today the charity is reaching out to the communities of LGBTQ+ people across the region inviting them to come forward to be part of its Alternative Manchester Pride Parade.  The Parade, which will this year be filmed in advance to keep it safe for those taking part, will have the theme March For Peace as it highlights the diversity of LGBTQ+ communities and their own unique reasons for joining the Pride protest each year.
The festival will feature individuals from LGBTQ+ organisations that are partners with or have been supported by Manchester Pride, some well known faces and twenty members of the community at large. Those wanting to take part should apply by filling in this form: https://form.jotform.com/202115055344342
Research shows that those from marginalised or disadvantaged groups who already experience poorer outcomes in healthcare are likely to be disproportionately affected by COVID-19.  What’s more, inequalities faced by LGBTQ+ communities may mean that the impacts of social distancing and self-isolation are particularly felt by LGBTQ+ people.*
The charity, which campaigns year round for LGBTQ+ equality, is responsible for one of Europe’s biggest celebrations of LGBTQ+ life every year and it was a huge blow to the team behind it earlier this year when they had to take the decision to postpone the 2020 festival until 2021 in the light of the COVID-19 pandemic.
With the safety of everyone involved with the event in mind, the festival, which generates over £34m of economic benefit for the city, has been moved to 2021.
The team behind the festival were forced to reevaluate everything the charity had planned in a matter of weeks and make a new plan to provide a celebration of LGBTQ+ life while keeping safety and wellbeing of the community at the forefront of these plans.
As a result, one element of the festival that is unable to go ahead this year in any form is the Gay Village Party.
However, Manchester Pride is committed to lending as much support as it can to these businesses and today launched a hub on its website which will house information on each Village business, from bars to chip shops to hairdressers. The hub can be accessed through www.manchesterpride.com/gay-village-hub.
With support of the community in mind, this year’s Alternative Manchester Pride Festival will feature a digital community support hub with details and information on vital community services that can be accessed year-round.
Since the beginning of lockdown, Manchester Pride has put a considerable focus on the importance of maintaining support for community organisations and conducted weekly conversations with local groups called Community Conversations which were uploaded weekly.
The conversations, which featured groups such as Trans Creative, akt, The Village Bakers and Salford Youth Services, played a vital role in raising awareness of the groups who continued to work and support the LGBTQ+ community through new and different mediums as a result of the pandemic.
Speaking today, Mark Fletcher said: “As we have always maintained, the roots of Manchester Pride both as an organisation and the Festival that we deliver each year are firmly in the heart of our world-famous Gay Village. It is incredibly unfortunate that we are unable to deliver our Gay Village Party this year, especially as we know how much these vital businesses have suffered as a result of the ongoing pandemic. This is the main reason that we have created a gay village hub on our website; to provide details of all of the venues for anybody planning a visit an any time of the year.
“I am really excited about our Alternative Manchester Pride Parade  It is very important to me that we remind the world that pride is a protest not just a party and that we all have our own reasons for taking part.  Globally LGBTQ+ people need to be heard now more than ever and by enabling them to still take part in this vital element of our festival we hope that we will be helping them to continue this important conversation.”
For more information about the Alternative Manchester Pride Festival visit manchesterpride.com.