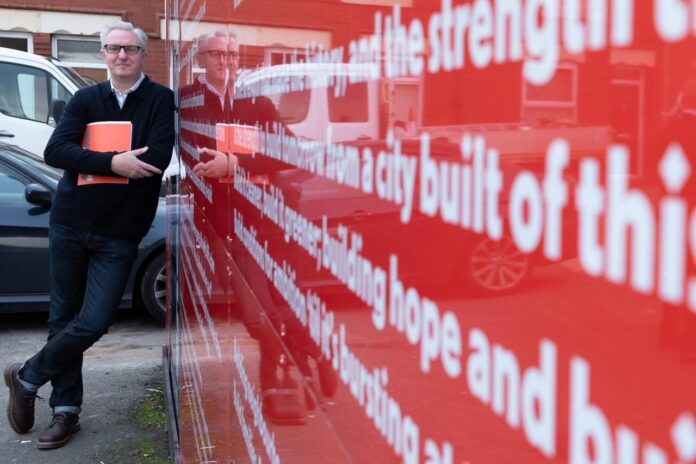 Manchester poet Tony Walsh has penned a new poem to honour the spirit of Salford and commemorate a new era of housing and regeneration in the city.

The critically acclaimed wordsmith, also known as Longfella, has teamed up with developer Step Places and housing association Salix Homes to write a poem to celebrate their new Neighbourhood development in Seedley South.

The honorary Salfordian, who has a long-standing connection to the city and received an honorary doctorate from the University of Salford in 2018, performed his new poem Salford Keys – at the official launch of the 157-home development, which took place today (Thursday, October 14).

Tony had previously worked in the Seedley and Langworthy area as a community regeneration manager for Salford Council between 2003-2011, when he was based at the Cornerstone community centre – just a stone’s throw from the new development.

He said: “I have an association with Salford going back 40-years and know every back alley of this area in particular. Having worked on the regeneration project 15 years ago, it’s great to see what was planned back then finally come to fruition and the new Neighbourhood development will be central to the regeneration of the area.

“The poem is inspired by Salford’s ambition, drive and spirit. What struck me is the location of Neighbourhood – on top of the hill looking down at MediaCity and what was the docks. Salford had one of the biggest ports in the Commonwealth, yet is 30 miles inland, so if that doesn’t speak about the city’s spirit then I don’t know what does.

“It’s a city that’s had its challenges, but it’s made a comeback. A lot of people are doing amazing things in Salford and new housing is a key part of that regeneration. For me, the best thing about Salford is its people – the humour, the language and that Salford pride. It’s a city with its own distinct and proud identity.”

Neighbourhood is a mix of two, three and four-bedroom homes and one and two-bedroom apartments to be built on two brownfield sites off Kara Street and Liverpool Street that have stood empty for more than a decade.

It has been purposefully designed to combine innovative architecture and contemporary living to create a vibrant and aspirational community of modern, high-quality and energy efficient homes that will complement the wider regeneration taking place across the city.

The innovative design is a modern take on the traditional terrace house, complete with raised terrace gardens for some of the properties. There will be a public green space at the heart of the development, 86 trees planted, and all houses will have cycle storage and electric car charging points.

Sue Sutton, chief executive at Salix Homes, said: “Neighbourhood represents a new era of housing in Salford, so it’s been a real honour to work alongside Tony Walsh who has such a strong connection to the area and, having grown up in social housing himself, values the importance of high quality, affordable housing as much as we do. His new poem perfectly captures that famous Salford spirit and strength of community, which we’re aiming to re-create at Neighbourhood.”

Harinder Dhaliwal, managing director at Step Places, added: “It’s been fantastic to welcome Tony Walsh to Neighbourhood and back to his old stomping ground to perform his new poem, marking the official launch of this exciting new development, which promises to create a vibrant and sustainable community and bring back that strong neighbourly spirit that Salford is renowned for.”

Right To Walk Announces Back To The City Digital Campaign