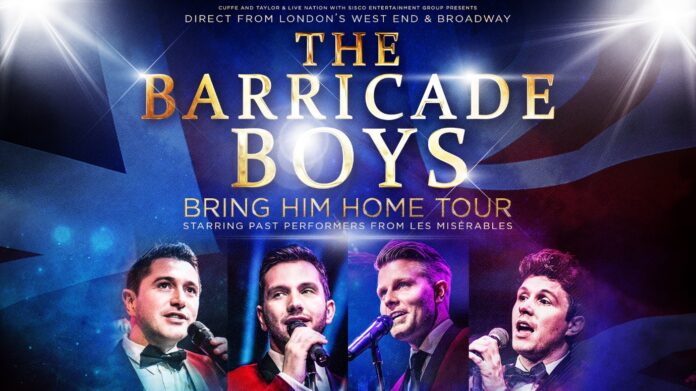 The UK’s most exciting musical theatre group The Barricade Boys are heading back on the road in 2022, with their Bring Him Home Tour coming to Manchester.

Starring past performers from the global theatrical sensation that is Les Misérables, The Barricade Boys have entertained fans around the world since they formed in 2015 and now they are coming to Manchester Opera House on Sunday May 15.

The Bring Him Home Tour will feature music from some of the best-loved shows from the West End and Broadway stage, including Phantom Of The Opera, Miss Saigon, Jersey Boys and, of course, Les Misérables, as well as hits from some of pop and rock music’s all-time greats including Queen, Elton John, The Beatles, Ed Sheeran and Adele.

The Barricade Boys are Kieran Brown, Scott Garnham, Craig Mather and Simon Schofield – who together wowed crowds with their fifth consecutive appearance at the annual celebration of London theatre West End Live earlier this month.

Simon and Scott established The Barricade Boys with the aim of creating a night at the musicals like no other. They blend powerhouse vocal harmonies and slick dance routines with a journey through the decades of musical theatre, bound together by the friendship and affection they have for each other, sharing anecdotes from the shows they have starred in.

Announcing the tour, Scott said: “The Barricade Boys all have one thing in common – our shared history of performing in the West End, International tour and movie versions of Les Misérables, which is the world’s greatest musical without a doubt. Through that connection, we have developed great friendships which make our shows a very special event for theatregoers.”

Other credits listed by The Barricade Boys include the West End hits Mamma Mia, Wicked, Billy Elliot, The Book Of Mormon, The Sound Of Music and Joseph And The Amazing Technicolor Dreamcoat.

Simon added: “While our background is in musical theatre, we also love to perform hits from the greatest artists of our time – and we can’t wait to share our take on tracks from music legends such as The Rolling Stones, Tom Jones, The Beatles and Elton John.”

The Bring Him Home Tour follows The Barricade Boys’ lockdown hit, where they drew together famous faces from the West End and Broadway – including Alfie Boe, Ramin Karimloo and John Owen Jones, to release a special new version of the iconic Les Mis’ track Bring Him Home.

Ben Hatton, Director of Theatre Touring for promoters Cuffe and Taylor, said: “A night with The Barricade Boys is a must-see for any fans of musical theatre. They are an exceptionally talented group who were all born to entertain and we’re delighted to present their latest UK tour.”

Tickets go on sale on Friday October 1 from www.cuffeandtaylor.com