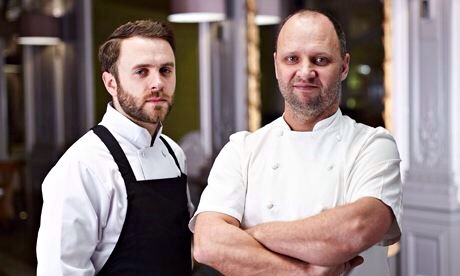 Two of Manchester’s top chefs go head to head on the BBC tonight in Restaurant Wars, the first of a three part series, billed as the ultimate food fight.

Aiden Bryne and Simon Rogan headed to the centre of Manchester with exactly the same ambition, to open a Michelin starred restaurant in a city that hasn’t had one for 30 years.

Simon is set to transform the historic Midland Hotel to attract the Manchester high society and less than a mile up the road, Aiden has a budget of over £5 million to create a vast, glitzy warehouse conversion.

Both men think they’re worthy of Michelin and Manchester stardom but this is a city that’s so far been unimpressed with fine dining and a city undergoing a lot of change.

The programmer promises to show the secret world of menu conception, explore the passion and pain of culinary genius while revealing the colossal financial risk of opening a world-class restaurant in a recession.

With two of the food scene’s rising stars and biggest personalities, the battle for Manchester begins.

The Different Kinds Of Bingo Games Available Online For Brits