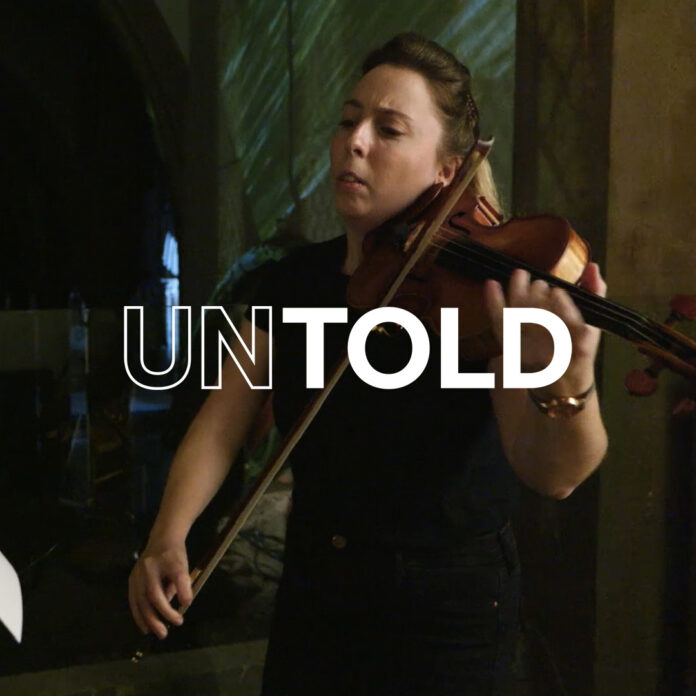 On Thursday October 1st at 8pm – Manchester Camerata broadcasts the very first of a brand new series of online films on United We Stream.

Commissioned and curated especially by the orchestra during these unique and unprecedented times – the Untold series tells the remarkable and intimate personal stories of real people in the community through film, storytelling, prose and of course stunning music performed from The Monastery in Gorton.

Directed by award winning Northern filmmaker, Paul Sapin, each film in the Untold series tells a different story – with each one bound by the same goal – ‘to heal through music’ (Gábor Takács-Nagy, Music Director). The series addresses universal themes of identity, belonging, loss, love, community and inequality with music performed by Camerata musicians very much at the heart of each one.

Untold begins on October 1st with ‘Caroline’. As one of Camerata’s Violinists and Co-Leaders, Caroline Pether reveals her own struggle and journey to acceptance as a gay, Christian woman in this moving and deeply personal film set to music by Haydn, Arvo Pärt, Strauss and Harbison performed by Caroline and her fellow Camerata musicians. This opening film also features original spoken word written and performed by poet and Scots Makar Jackie Kay, a Chancellor of the University of Salford.

Untold marks a bold and creative departure for the orchestra fusing music, spoken word, film and multi camera work both for the first time and at a time when live performance is heavily restricted but much needed. These films enable Manchester Camerata – an orchestra that puts community impact front and centre – to remain connected to the needs of its musicians, collaborators, audiences and the wider community.

Subsequent films to be made in the series – for which Manchester Camerata is currently fundraising and seeking donations – will feature both Camerata musicians and collaborators including its Music Director Gábor Takács-Nagy and musician Peter Hook. The series will continue to reveal personal experiences of early onset dementia, repatriation, identity and stories of renewal and reinvention.

Gábor Takács-Nagy, Camerata’s Music Director comments: “After this crazy time, when the whole world was sick, more than ever music is needed to serve as a spiritual medicine to help the healing process. And with these films created by and with our orchestra, our musicians and our collaborators we very much hope our music, our stories and our personal revelations can reach out to show people not only are they not alone but that we can all come together wherever we are bound and united by music as therapy, as comfort and as joy.”

Caroline – the first in Manchester Camerata’s Untold Series streams at 8pm on Thursday 1st October on United We Stream. Dates and times of the remaining series are to be released at a later date.  https://unitedwestream.co.uk/