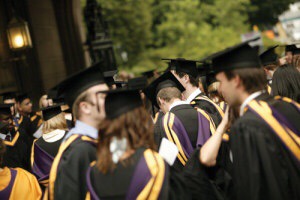 But Brain drain to the London and the South East continues

Ahead of the Autumn Statement, a new report warns that most UK cities are struggling to attract the high-achieving graduates critical to driving economic growth – with top-ranking students flocking to London for the job opportunities and career progression it offers.

The report, ‘The Great British Brain Drain: where graduates move and why’, published today by the think tank Centre for Cities, shows that a quarter of all new graduates (24%) from UK universities in 2014 and 2015 were working in London within six months of finishing their degree.

Moreover, it shows that London is far outperforming other cities in drawing talented graduates from leading UK universities.

The report also shows that Manchester is the 2nd most popular for new UK graduates, and has the 2nd highest graduate retention rate in the country.

Manchester also attracted the 2nd highest share of top-ranking Russell Group graduates who moved for work, and was the 4th most popular place for new Oxbridge graduates – though the city is a long way behind London on all those fronts.

In 2014-15, the capital attracted more than a third (38%) of new Russell Group graduates with first-class or upper-second class degrees who moved for a job (1) – around 13 times more than Manchester, the second most popular destination for this group.

This trend was even clearer for new Oxbridge graduates, with London gaining more than half (52%) of those who moved for work after finishing university, compared to just 2% in Birmingham and Bristol respectively.

The report makes a number of recommendations on how national and local leaders can address the graduate brain-drain and argues  that these should be key considerations in the Autumn Statement, and in the Government’s new economic and industrial strategy to “drive growth up and down the country.

·Graduates choose where to move based primarily on the relative economic attractiveness of places and the opportunities they offer.

There is little evidence that policies focused only on influencing where graduates move, such as graduate wage subsidises, are effective. Other initiatives to improve links between local employers and graduates, and to communicate about existing graduate opportunities, will have most impact in the context of wider economic growth.

Cities should therefore focus primarily on strengthening their economies, by investing in transport, housing, innovation and enterprise. This will be more effective in generating more graduate jobs and opportunities for career progression, and making places more attractive for high-skilled workers.

Cities also need to prioritise developing home-grown talent, rather than concentrating mainly on attracting graduates from other places. Improving educational attainment among local residents will help to increase the supply of home-grown high-skilled workers. A more skilled local workforce will also enable cities to support more high-value jobs and businesses, which in turn will boost their appeal for all graduates.
Commenting on the findings of the report, Alexandra Jones, Chief Executive of the Centre said:

“The Government will not achieve its vision of extending prosperity and growth across the country unless it takes steps to help more cities attract and retain the UK’s top talent. Wage subsidies and other specific graduate-retention policies will not tackle the root causes of this issue – instead, the priority for national and local leaders should be strengthening city-region economies, and increasing local demand and opportunities for graduates.

“In the Autumn Statement, the Government should therefore focus on boosting economic growth in city-regions across the country by investing in large-scale housing and transport projects. It should also use the new economic and industrial strategy to reinforce and complement the devolution deals currently in place for city-regions like Greater Manchester, to give them greater scope to grow their economies, and to develop and attract talented workers.”