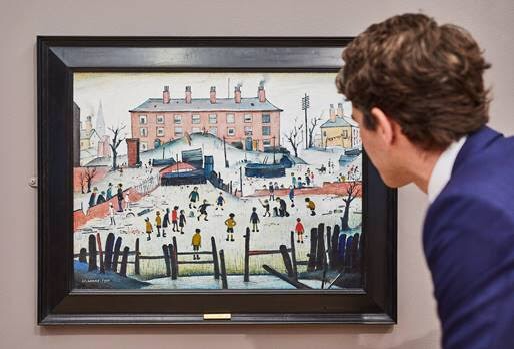 In the midst of the Cricket World Cup fixtures, L.S. Lowry’s charming depiction of a backstreet cricket match in Salford from 1938 sold for £1,155,000.

A wonderful example of Lowry at his very best, A Cricket Match made its first appearance on the market since it sold at Sotheby’s in June 1996 for £282,000.

One of only a handful of occasions when the beloved British artist turned his hand to the sport, the rare work gives children the centre stage, as both enthusiastic players and spectators – a counterpoint to the burdensome life of the adults and their dilapidated surroundings.

A highlight of Sotheby’s Modern & Post-War British Art Evening Sale, the painting was offered alongside beautiful examples by some of the century’s most significant artists. Among the top lots were two definitive Modern British works by Henry Moore and Ben Nicholson.

The work had previously been featured in the artist’s major retrospective at Tate Britain in 2010. Making its auction debut, Ben Nicholson’s stellar modernist re-telling of the still-life brought £639,000 / $836,195. Inspired by the Synthetic Cubism of Picasso and Braque, Nicholson gives the elegant work a British twist through his palette of greens, blues and pinks.

Thousands of claimants failed by DWP ‘culture of indifference’