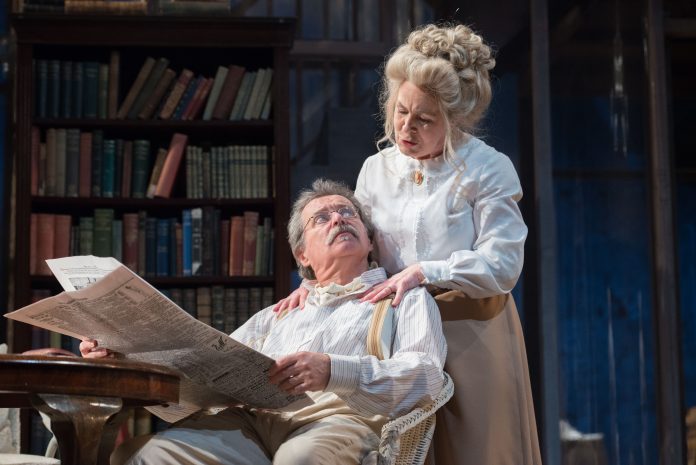 Directed by Dominic Hill and designed by Tom Piper, who both also worked on Endgame, Long Day’s Journey Into Night delves into the private lives and failings of the conflicted Tyrone family.

Due to the intensely personal nature of the play O’Neill refused for it to be performed in his own lifetime, though when it was finally performed in 1956, it would go on to win the Pulitzer Prize for Drama and a Tony Award for Best Play.

George Costigan, who is best known for portraying Bob in Alan Clarke’s 1987 film Rita, Sue and Bob Too, leads a cast of five in the role of the embittered washed- up actor and negligent father, James Tyrone.

In recent years George has starred in numerous TV drama series including Line of Duty, Happy Valley, Vera and Scott & Bailey and has also worked with Citizens Theatre Artistic Director Dominic Hill on acclaimed productions including Crime and Punishment, King Lear and Oresteia: This Restless House.

Playing opposite George is Bríd Ní Neachtain in the role of troubled wife and mother Mary Cavan Tyrone. A longstanding member of the renowned Abbey Theatre company, Bríd has a host of film and TV credits to her name.

Lorn Macdonald is known for his well-received performance as Renton in Gareth Nicholls’ Trainspotting, and for the role of Orestes in Dominic Hill’s critically acclaimed production of Zinnie Harris’s The Oresteia: This Restless House. In Long Day’s Journey Into Night Lorn plays Edmund Tyrone – a character modelled on Eugene O’Neill himself.

They will be joined by Sam Phillips, as the couple’s elder son, James Tyrone Jr. Sam’s screen credits include appearing alongside Martin Sheen in Far From the Madding Crowd and BBC One TV drama, The Syndicate, with stage appearances including the National Theatre’s renowned production of The History Boys.

The cast is completed by Dani Heron as Cathleen. Dani recently graduated from London Academy of Music and Dramatic Art with a first-class degree in acting.

The Lowry announces return of its hugely popular Open Day