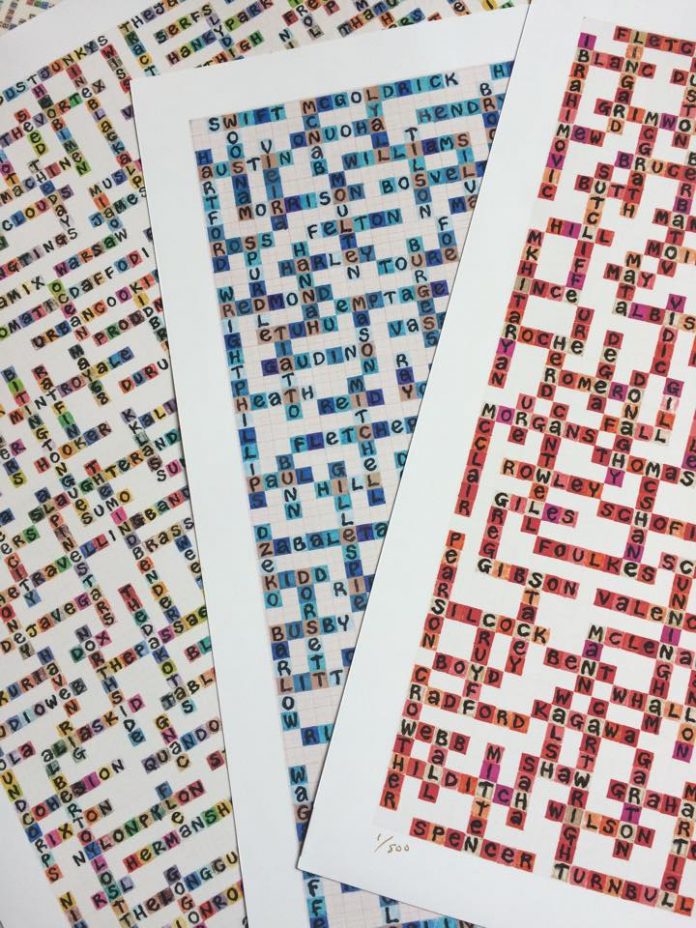 Alison’s first set of designs are all based around the theme of Manchester: Manchester Bands, Manchester City and Manchester United.

Alison, who grew up in Cornwall, moved to Manchester in the late 80s to study Fashion & Textiles and immediately immersed herself in the art, music and club scene. Having graduated with a BA Hons, she spent time freelancing in the design industry whilst also learning the ropes in the world of radio and music PR.

Married to radio engineer and author, Charlie – and mum to their four teenage children – Alison now freelances in PR, social media and events – mainly within the arts – as well as producing name-chains. Drawing inspiration from her children’s magnetic letters dotted around the fridge, Alison explains how the concept was created:

“I started thinking about a few Manchester bands and envisaging them linked together in a crossword format. I thought it would look effective and as I did a bit more research realised it hadn’t really been done before. I cross-referenced this first design using the Manchester District Music Archive and Manchester Beat websites – it contains the names of a selection of well-known and underground bands from different eras.”

“I realised this idea would translate into almost anything, but I wanted to stick with Manchester-related topics, initially, so I decided my next theme would be the football clubs Manchester United and Manchester City. I researched key players – past and present – focusing on captains, legends, and players with over 100 appearances in addition to some players who made and an impact but who didn’t necessarily play many games for their teams.”

“I’m currently completing a large character name-chain of the iconic Hacienda nightclub. Plus, I’m planning a Manchester venues design too, before I move onto other themes.”

Each name-chain artwork is unique the complex designs take time and precision. Each letter reflects Alison’s cursive font and each name-chain is executed into a vibrant and striking hand-coloured design.

Once Alison has completed one of the name-chains, artist/designer Amber Sanchez, digitises the artwork so it’s ready for printing, framing or to be adapted for black and white prints, T Shirts etc. The limited edition prints are already attracting significant interest – from businesses and the public – as centre-piece artworks for homes and offices, as well as exclusive gifts.

Alison has already received commissions for bespoke, one-off name-chains, as well as personalised versions of her designs.

Sauce and the City