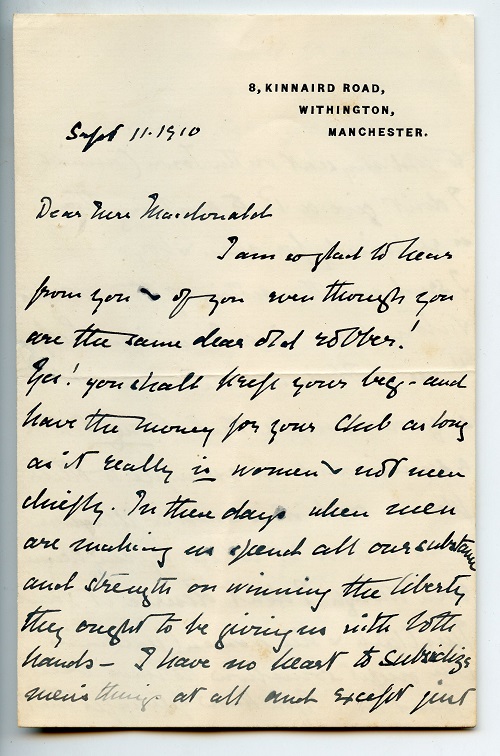 A letter has been unearthed from one of Manchester’s most celebrated suffragists that colourfully lambasts men resisting the campaign for women’s rights.

Historian Michala Hulme mistakenly bought the letter at auction without realising it had been written by Margaret Ashton – Manchester’s first ever woman councillor.

The letter was written in 1910 by Ashton to Margaret MacDonald, an influential trade unionist and wife of future controversial prime minister Ramsay.

In the letter, Ashton appears to be responding to a request for funding for a club, asking for assurances from MacDonald that it will not principally benefit men.

Ashton vividly outlines the frustrations against those resisting the fight for women’s suffrage at the time, telling MacDonald that she does not “give a P to anything that is exclusively for men & boys.

“In these days when men are making us spend all our substance and strength on winning the liberty they out to be giving us with both hands – I have no heart to subsidise men’s things at all…except just to hold my seat on the Town Council,” she writes.

The letter is now on display in Manchester Metropolitan University’s Special Collections Gallery.

She goes on to describe her joy at Manchester opening its first women’s lodging house – which bore Ashton’s name.

She says: “I send you the notice of the women’s victory here – in a municipal lodging House. It is so nice, so complete, so good & simple that it ought to be a success and an example to other places- and it is such a pleasure to me to have it called by my name even though I don’t deserve it and Mrs Clark & the women guardians Cttee ought somehow to have been joined in.”

She then explains that the committee has been suspended owing to a lack of funds and candidates.

Michala Hulme, Associate Lecturer in History at Manchester Metropolitan University, said: “The letter shows the great friendship between the two women and seems to be a request for funding a club that Mrs MacDonald is associated with.

“However, what is more interesting is that this letter shows what Margaret thinks of men at this time and how she refuses to support their causes while the suffrage struggle is still going on.

“I think that this letter is of great importance, especially since it is 100 years since some women got the vote. Margaret Ashton was a strong woman who fought for women’s rights and even got elected as the city’s first female councillor. I bought the letter on an online auction and I actually thought I was bidding on something else.”

Born in 1856, Ashton became the first woman city councillor when she was elected to represent Manchester Withington in 1908.

She went onto campaign for votes for women, as well as helping to found a Women’s Trade Union Council and a maternity hospital in Burnage with pioneering paediatrician Catherine Chisholme.

Ashton split from the suffrage movement during the First World War, advocating for peace and establishing the Manchester branch of the Women’s International League of Peace and Freedom.

For this, she was deemed a pro-German traitor in a city council resolution, which also refused to hang a portrait of her commissioned for her 70th birthday in 1926. Ashton died in 1937.

In recent decades though, Ashton’s reputation has been restored as a pioneering figure in Manchester history and a tireless activist for women’s rights and peace.