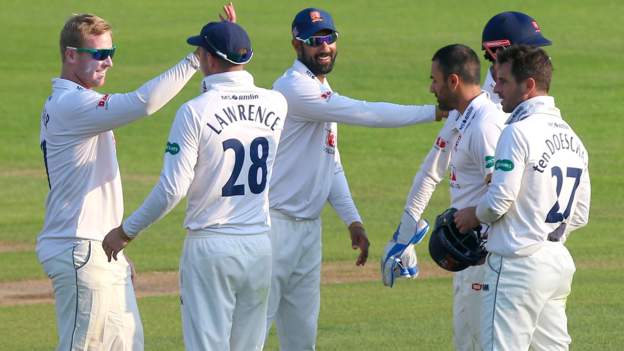 Lancashire fell to their second defaet of the season, beaten inside three days at Chelmsford by Essex.

Chasing 320 to win, Alex Davies, Jordan Clark and latterly Joe Mennie,  all posted half-centuries in what was probably an unrealistic chase but finished 32 runs short in the end.

Joe Mennie thumped three sixes in a third half-century of the innings that only ended when Jamie Porter removed his leg-stump to end the game.

Davies had taken the fight to Essex for 39 overs while compiling a flawless 71 before he was knocked off his feet by Porter after facing 85 balls and hitting 11 fours.

Clark took up the gauntlet upon Davies’s departure. But when he was eighth man out, with 77 runs required, the red rose wilted visibly and they finished 32 runs short. Clark’s belligerent innings lasted 80 balls, and included five fours and a six, while 104 runs were knocked off the target during his stay at the wicket.

Mennie, who departed for 56 after a 91-ball cameo, ensured the Lancashire tail wagged to the extent that the last pair put on 42, with Matt Parkinson contributing just four.