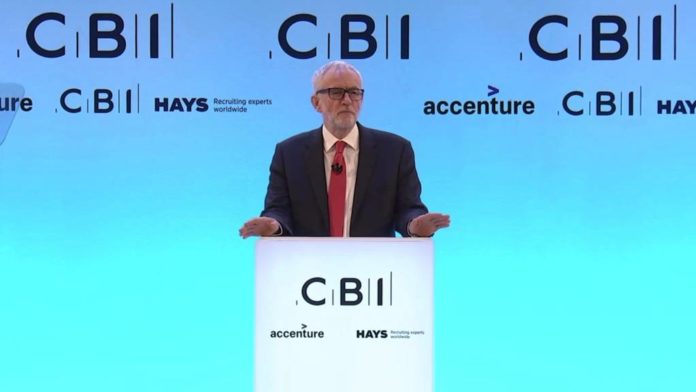 Jeremy Corbyn will use his speech to the CBI this morning to announce that a Labour government will creat​e a climate apprenticeship programme to deliver 320,000 apprenticeships in England during its first term in government. By 2030 the programme will have created 886,000 apprenticeships.
Britain has a severe skills shortage, particularly in higher technical skills. Two-thirds of businesses already worry they won’t be able to fill skilled posts and the skills gap will only grow due to automation and the need to respond to climate change.
The global green economy is currently valued at $4 trillion, and is projected to grow to $9 trillion in value by 2030. Climate Apprenticeships will upskill the UK workforce so that UK companies can compete and succeed in the new economy.
Businesses will benefit from an average of 80,000 people per year being trained as apprentice engineers and technicians in renewable energy and transport, civil engineers and skilled tradespeople in sustainable construction, designers, welders and fabricators in low carbon industries, and sustainable agriculture and forestry specialists. Climate Apprenticeships will be open to new starters and those wanting to retrain.
Climate Apprenticeships will be funded by diverting 25 per cent of the funds employers already set aside through the Apprenticeship Levy and topped up by any dividends over the cap paid into Labour’s Inclusive Ownership Funds – expected to be £700 million by 2024.
This comes as part of a package of reforms to the apprenticeship scheme. Since the Conservatives’ reforms were introduced in 2017 there has been a 20 per cent fall in the number of apprenticeship starts, businesses are unable to deliver the quality training they need and too many young people are unable to access education and training opportunities.
Labour will give employers more flexibility in how they spend their levy funds, so they can be more responsive to the needs of the economy. Reforms include allowing levy funds to be redeemed for a wider range of accredited training and extending the period of time allowed for employers to spend their levy. Labour will also increase the amount of money businesses are allowed to transfer to non-levy paying small and medium-sized businesses.