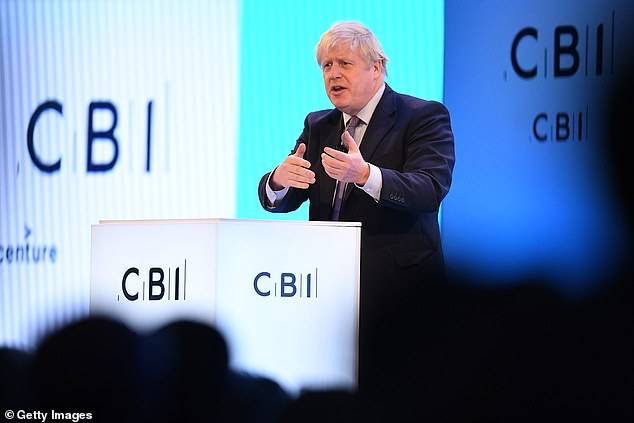 The Prime Minister has announced that planned cuts to corporation tax next April are to be put on holdwith the money being spent on the NHS.

The rate paid by firms on their profits was due to fall from 19% to 17% but Boris Johnson told the CBI conference the move could cost the Treasury £6bn and the cash would be better spent on the “nation’s priority”.

All three leaders of the main parties are speaking to the Conference today.

Johnson told the Conference of business leaders that his priorities are better infrastructure, better technology and better education and spoke of getting  getting Brexit done so that the UK can focus on “uniting and levelling up the country, because if potential of the country is enormous, so is the injustice,” pointing to regional differences in productivity, life expectancy and skills

“The UK attracts phenomenal inward investment, but there’s a pent up tidal wave of investment in the wings” he told the audience adding that the country is being held back by politics,  meaning economic and business triumphs aren’t as numerous as they could be

“Conservative commitments to unblock the pent-up potential of British enterprise will be welcomed by businesses who have faced an ever-growing burden of costs and uncertainty.

“Postponing further cuts to corporation tax to invest in public services could work for the country if it is backed by further efforts to the costs of doing business and promote growth.

“Reforming business rates has been a key priority for CBI members. This means that we will finally get to grips with a broken system that damages investment and jobs and could breathe new life into our high streets and other sectors.

“Business welcomes the Prime Minister’s passion for levelling up opportunities throughout the country through investment in education, infrastructure and technology. But his words must become firm commitments in the Conservatives’ manifesto in order to get the UK economy back on track.

“Action at home must be accompanied by the right type of Brexit certainty. That means a new relationship with the EU that maintains frictionless trade, keeps close regulatory alignment and supports our services sector. Unnecessary deadlines and damaging cliff edges should be replaced by taking the time needed to secure a sustainable, ambitious relationship.”

Tories to pledge £500m for left behind towns

Labour will close the gender pay gap by 2030