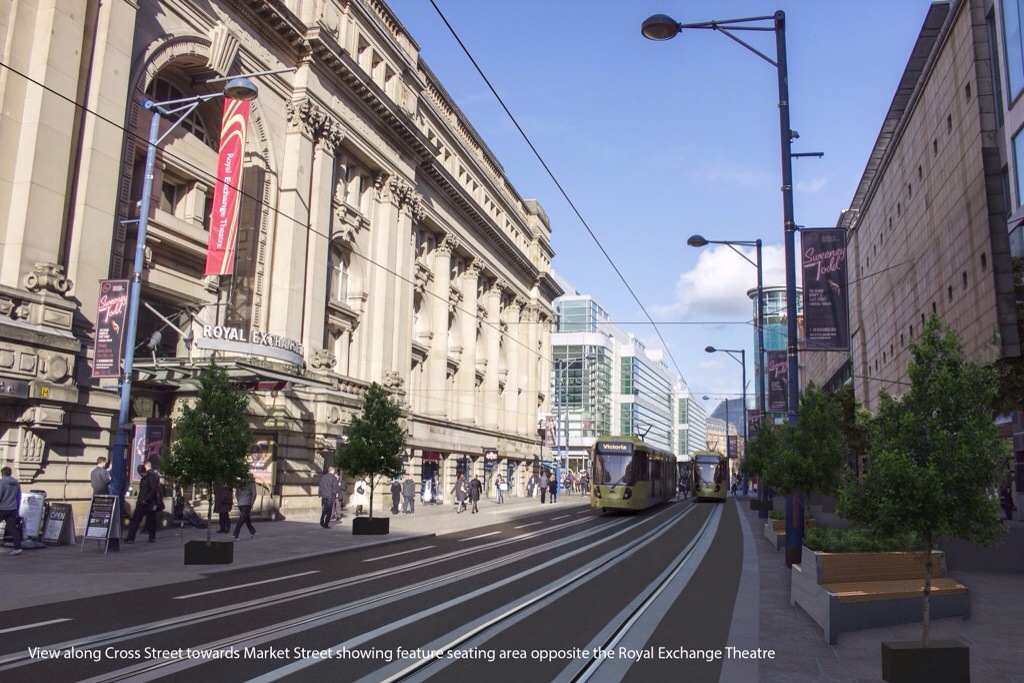 Newly released images from Transport for Greater Manchester give a glimpse of how trams will soon be travelling on the new line past city centre landmarks like the National Football Museum and the Royal Exchange Theatre.

Major utility upgrade works are now under way outside the Exchange Square entrance to the Arndale shopping centre, where a brand new stop will also be built.

The second city crossing (2CC) will allow Metrolink to run more trams through the city centre, meaning an increase in frequency and more flexible, reliable services as the network grows to treble in size. As part of the project, two new stops will be built in Exchange Square and St Peter’s Square.

The first stage of work,to divert gas pipes and electricity and phone cables buried in the highway away from the footprint of the new tramway – is now advancing along Corporation Street and Cross Street.

Localised road closures and diversions are in place but pedestrian access to businesses is maintained at all times. TfGM is working closely with Manchester City Council to minimise any disruption and ensure the works are integrated with other developments in the city centre.

A range of further exciting Metrolink developments are also currently taking place in the city, including the transformation of the Manchester Victoria and Deansgate-Castlefield stops.

The Manchester Victoria upgrades began in late February and will see the stop completely redesigned and expanded to provide additional platforms and tracks, accommodating the new Second City Crossing and wider network expansion.

Work will be carried out at various sections of the 2CC route until its completion in early 2017. However, subject to ERDF funding, main construction works on the section to Exchange Square could be complete in the second half of 2015.