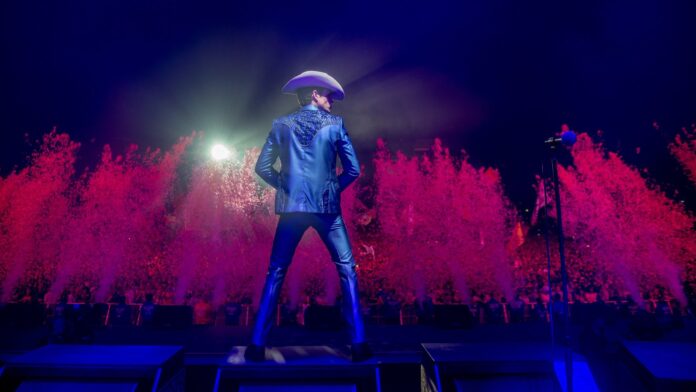 THE KILLERS today confirm replacement dates for their UK and Ireland stadium tour, which had been due to start in May, with rescheduled dates for all original shows now taking place in May/June 2022 due to the ongoing pandemic.

The tour, the band’s biggest ever, sold out in hours when it first went on sale for dates in 2020, but fans are assured that all tickets held for the original dates will be honoured and are now transferable to the corresponding 2022 show. The band has also added an extra show at Falkirk Stadium on 7th June, tickets for which go on general sale this Friday.

The Killers say: “UK and Ireland friends… We’re sorry, but there’s no way around this. These will be the same great shows, but we have to move them to next year. All tickets will be honored, so we really hope you can still join us!”

Imploding The Mirage is The Killers’ sixth studio album, and their record breaking sixth consecutive UK #1 LP. Spawning the massive singles, Caution, My Own Soul’s Warning and Fire In Bone, it was produced by the band in conjunction with Shawn Everett and Jonathan Rado of Foxygen, and was recorded in Los Angeles, Las Vegas, and Park City, Utah. The band are currently in the studio working on songs for a new album.

Since the release of their 2004 debut, Hot Fuss, The Killers have sold 28 million albums, headlined stadiums and festivals around the world and won dozens of accolades globally. Their last UK show was their celebrated Glastonbury headline set in June 2019, which saw them joined, in the encore, by Johnny Marr and Pet Shop Boys. Relive the joy of that night and look forward to the day we can all stand in a field (or, indeed, stadium) together again, with highlights from the BBC, HERE.

Any remaining tickets for selected dates are available from   gigsandtours.com and ticketmaster.co.uk.