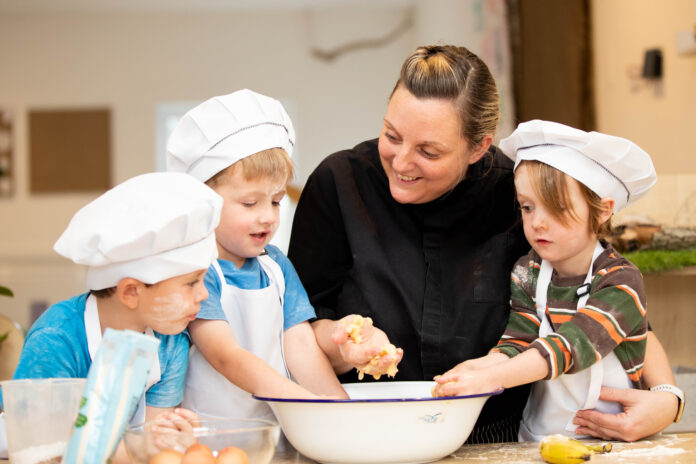 The team at Back to the Garden Childcare, on Sinderland Road in Altrincham, allowed its children to take over the kitchen, and indeed the whole nursery, for one day only!

To celebrate Kids Take Over The Kitchen Day (13th September), an event pioneered by the Young Chef Academy and now in its ninth year, fun food-related activities were arranged throughout the nursery, ensuring all children were involved, from babies up to pre-schoolers.

The aim of the event is to involve children in the preparation of food and planning of meals, with the hope that the little ones will learn about nutrition and healthy eating habits, and perhaps become budding masterchefs when older.

At Back to the Garden, a fulfilling day was planned which incorporated making smoothies and fruit kebabs, baking bread and banana muffins, as well as picking vegetables grown in the nursery’s very own garden.

A box of mixed fruit and vegetables was also contributed to the nursery from High Legh-based Groobarbs Wild Farm, allowing the children the chance to see and feel different produce straight from the field.

Fun activities in the garden with the mud kitchen were also involved, and the children helped with cleaning up afterwards, from sweeping the floor to loading the dishwasher.

Jen Carmichael (from Urmston), Cook at Back to the Garden Childcare, says; “Kids Take Over The Kitchen Day is a great way to involve children in food preparation and cooking. It is so important children learn about healthy eating habits early on and understand the link food has on our health and emotions, not only to establish a long-lasting good diet but to also prevent serious health issues in future years.

“Our ethos is very much based on healthy eating. We actively encourage children to taste and experiment with food, and to respect where it comes from. To help with this we grow our own produce each season in the garden, with the children helping to nurture it daily. On Kids Take Over The Kitchen Day, we asked children to pick some vegetables, clean them, chop them and then see how that ingredient was used in one the dishes we made.

“It really was a fantastic day and the interactive activities really brought out the children’s interest in and love of food, which was super to see.”

Altrincham nursery leads the way with a new outdoor classroom