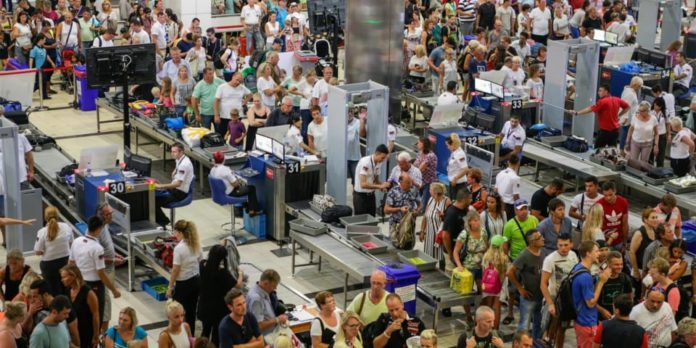 Passengers travelling through Manchester face the longest average security queue waiting times of any large UK airport, according to Which? research.

All three of the northern hub’s terminals had worse waiting times than rival airports – averaging 16 minutes per passenger – while in the worst-case scenario one holidaymaker reported queuing for up to 90 minutes.

Stansted and Luton also featured among the worst large airports for security queues, with average waiting times of 14 and 12 minutes respectively.

The consumer champion asked more than 4,000 passengers to provide an estimate of how long they were kept waiting while going through security on their most recent visit to the airport.

Manchester appears to have downgraded its waiting time targets after failing to get to grips with long queues at security.

In 2017, airport bosses failed to hit their self-set target of getting 95 per cent of travellers through security in less than eight minutes – but that has since been changed to a more modest goal of getting 92 per cent of passengers past security checks within 15 minutes.

Overall, there were 10 UK airports – including Heathrow T3 and T4, Leeds Bradford and East Midlands – where the longest waiting times reported by passengers was an hour or more.

The small airport with the longest queuing times – and worst in the UK overall – was Belfast International, where passengers were stuck at security for 22 minutes on average. In the worst case, one traveller reported waiting for more than two hours (130 minutes).

Last month Which? revealed that the Northern Irish hub had been voted the worst airport in the UK – with passengers frustrated by problems including long queues, crowded terminals and pricey parking charges.

The airports with the fastest average security queues in Which? ‘s research – Southampton, Southend and Exeter – were also the airports that earned some of the highest customer scores (after Doncaster Sheffield) in the Which? airport survey.

“Never-ending queues through security are a pain at the best of times, but if you are left waiting for hours on end you could find your flight has left without you.

“To add insult to injury, if this happens you are unlikely to qualify for compensation as the time it takes to get through security is out of the airline’s control.

“Airlines will rarely delay a flight due to long queues at security so it’s important to arrive at the airport in plenty of time, especially if you are flying from Manchester or Belfast.”