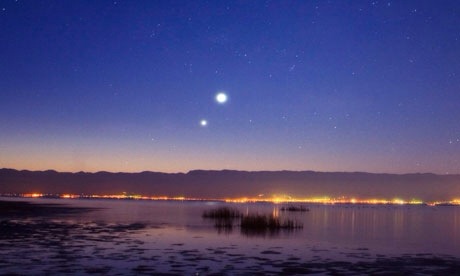 Those rising early on Monday morning may witness a brilliant astronomical occurrence in the skies above Manchester.

Two planets, Venus and Jupiter will form what will appear to be a ‘double star’ on the north-eastern horizon in what will be the closest conjunction of the bright planets since 2000.

The two planets have been shining brightly in the pre-dawn sky for a while now, but as they trace out their separate orbits around the Sun they appear to move relative to one another, Venus the faster of the two.

Tomorrow morning around 5am, they’ll be at their closest, only 12 arcminutes apart, about one third of the diameter of the Moon.

Don’t worry though if the skies above Manchester are cloudy, there will be a chance to see the spectacular show for a few mornings yet and if you miss it all together, the next conjunction between the two planets is due to occur on 30 June next year, but will be less close.