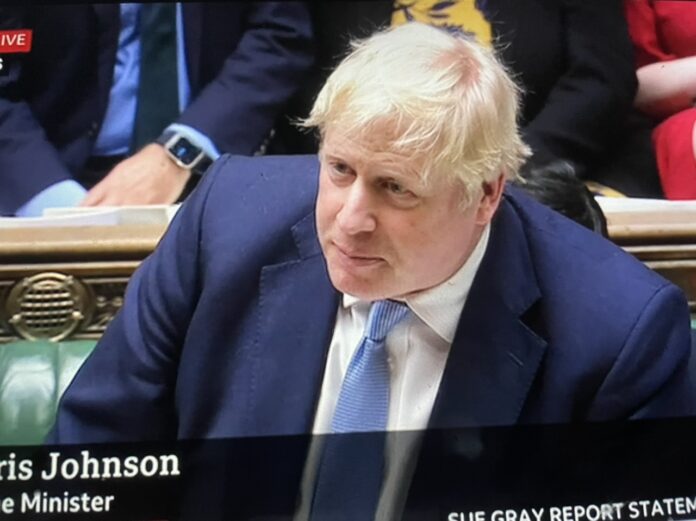 Johnson said that there would be a major shake-up of the way Downing Street is run following Sue Gray’s report into the partygate affair.

He said he was “sorry for the things we simply didn’t get right and also sorry for the way that this matter has been handled”.

He accepted Gray’s “general findings in full” and “above all her recommendation that we must learn from these events and act now”.

A new office of the prime minister will be created with a new permanent secretary to lead No.10 to simplify the chain of command, Johnson said, as well as a review of the code of conduct for special advisers.

However to calls from opposition benches to resign,Sir Kier Starmer called The Prime Minister a man without shame’

As the anger in the House rose, The Speaker was forced to ask SNP leader Ian Blackford to leave the Commons for repeatedly accusing Boris Johnson of “lying” and “misleading the House”.

However it was an intervention by former PM Theresa May who asked “Either he  hasn’t read the rules, or understood the rules or didn’t think the rules applied to No 10? Which is it” which could mark the swan song of Johnson’s Premiership

Meanwhile Tory MP Aaron Bell tells Boris Johnson he drove three hours to his grandmother’s funeral in May 2020 – “I didn’t hug my siblings, I didn’t hug my parents, I gave a eulogy. Afterwards I didn’t even go to her house for a cup of tea…

“Does the Prime Minister think I’m a fool?”