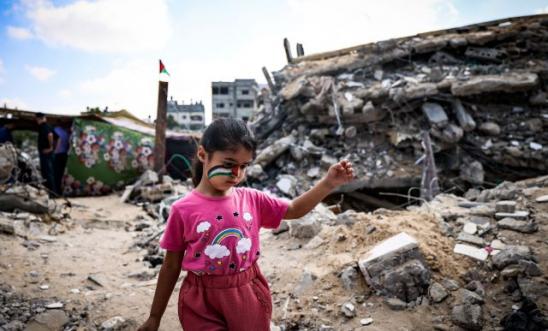 Amnesty International accused Israel of subjecting Palestinians to a system of apartheid founded on policies of “segregation, dispossession and exclusion” that it said amounted to crimes against humanity.

The London-based rights group said its findings were based on research and legal analysis in a 211-page report into Israeli seizure of Palestinian land and property, unlawful killings, forcible transfer of people and denial of citizenship.

Amnesty’s investigation details how Israel enforces a system of oppression and domination against the Palestinian people wherever it has control over their rights.

This includes Palestinians living in Israel and the Occupied Palestinian Territories (OPT), as well as displaced refugees currently in other countries.

In light of the report, Amnesty is calling on the UK government to ensure there is a “major re-assessment” of its foreign policy position and strategy on Israel so as to “confront and begin to tackle the scale and systematic nature of Israel’s apartheid crimes” (see ‘UK should use close diplomatic ties to push for change’ below).

Amnesty’s findings build on a growing body of work by Palestinian, Israeli and international NGOs which has increasingly applied an apartheid framework to the situation in Israel and/or the OPT.

A system of apartheid is an institutionalised regime of oppression and domination by one racial group over another. In international criminal law, specific unlawful acts which are committed within a system of apartheid and with the intention of maintaining it constitute the crime against humanity of apartheid. These acts are set out in the Apartheid Convention and the Rome Statute, and include unlawful killing, torture, forcible transfer and the denial of basic rights and freedoms.

Amnesty has documented acts outlawed in the Apartheid Convention and Rome Statute in all areas Israel controls, although they occur more frequently and violently in the OPT than in Israel.

Israel enacts multiple measures to deliberately deny Palestinians their basic rights and freedoms, including draconian movement restrictions on Palestinians in the OPT; chronic discriminatory underinvestment in Palestinian communities in Israel, and the denial of refugees’ right to return. Amnesty has also documented forcible transfer, administrative detention, torture and unlawful killings, both inside Israel and in the OPT.

These acts form part of a systematic and widespread attack directed against the Palestinian population – and are committed with the intent to maintain the system of oppression and domination; they therefore constitute the crime against humanity of apartheid.

The scale and seriousness of the violations documented in Amnesty’s report call for a drastic change in the international community’s approach to the human rights crisis in Israel and the OPT.

Amnesty is calling on the International Criminal Court to consider the crime of apartheid in its current investigation in the OPT and calls on all states to exercise universal jurisdiction to bring perpetrators of apartheid crimes to justice.

“Our report reveals the true extent of Israel’s apartheid regime. Whether they live in Gaza, East Jerusalem, Hebron or Israel itself, Palestinians are treated as an inferior racial group and systematically deprived of their rights.

“We found that Israel’s cruel policies of segregation, dispossession and exclusion across all territories under its control clearly amount to apartheid. The international community has an obligation to act.

“For Palestinians, the difficulty of travelling within and in and out of the OPT is a constant reminder of their powerlessness. Their every move is subject to the Israeli military’s approval, and the simplest daily task means navigating a web of violent control.

“There is no possible justification for a system built around the institutionalised and prolonged racist oppression of millions of people.

“Apartheid has no place in our world, and states which choose to make allowances for Israel will find themselves on the wrong side of history. Governments who continue to supply Israel with arms and shield it from accountability at the UN are supporting a system of apartheid, undermining the international legal order, and exacerbating the suffering of the Palestinian people.

“The international community must face up to the reality of Israel’s apartheid, and pursue the many avenues to justice which remain shamefully unexplored.

“Israel must dismantle the apartheid system and start treating Palestinians as human beings with equal rights and dignity. Until it does, peace and security will remain a distant prospect for Israelis and Palestinians alike.”

A man who shot his victim in the foot after carrying out another shooting...