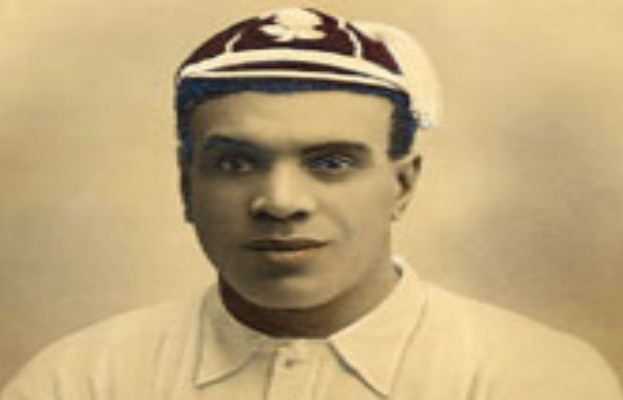 Scoring two tries in his five Tests, although he was undoubtedly a pioneer, it would be 80 years before another black player represented England.

In 1890 he was sent to Fegan’s Orphanage in London and then the Little Wanderers Orphanage in Greenwich. Here boys learned trades and sports and, outstanding at sport, Jimmy captained the home’s cricket and rugby teams and in their 1894 sports day won the 100 yards sprint, 1 mile race, long jump, high jump and walking race.

He began playing rugby, running out for Blackheath FC, before leaving the orphanage in 1898 to work as a carpenter in Bristol. After playing for Dings in the Temple Meads area, he played for Bristol FC for the first time in 1900, representing them 35 times before moving to Plymouth, where he played for Plymouth RFC and then Devon.

In those days, before the positions of scrum half and fly half, Jimmy was described as a half-back, organising the game on the field. In 1906 he was selected for England alongside Adrian Stoop, the pair playing a pivotal part in England’s first defeat of Scotland for four seasons. In his next match he scored a try in England’s inaugural international against France.

Before his England debut on 17 March against Scotland, the Western Times wrote on 5 February that year that sadly Jimmy Peters wasn’t selected to play earlier against Wales, having been “sacrificed” because “colour was the difficulty”.

There were reports of racism and, with a touring South Africa team said to be unhappy playing against a black man when taking on Devon, Jimmy was dropped for England’s match against the tourists and not included in the next England trials. He was awarded four more caps, his last at Ashton Gate, Bristol, in 1908, against Wales. At the outbreak of World War One he worked in Plymouth’s naval dockyard, where he injured his hand.

Given a Plymouth testimonial, he was banned from rugby union as it was deemed professionalism and against the RFU’s amateur regulations. Although his injuries improved, the ban saw him switch codes to rugby league, playing for Barrow, before joining St Helens in 1914.

He married and had a family in Plymouth, becoming a teetotal publican. He died in 1954 aged 74 and was buried in Plymouth Old Cemetery. In 2014 Twickenham’s World Rugby Museum learned that his grave had no headstone, making it impossible to identify. The following year a new headstone was installed paying tribute to Jimmy becoming England’s first black international rugby player.

It was 80 years after his last cap that Chris Oti scored a hat-trick on his England home debut at Twickenham in a 35-3 win over Ireland in 1988, two weeks after making his Test debut in a 9-6 Calcutta Cup match win in Scotland. In England’s 31-man squad for the 2019 Rugby World Cup in Japan were 10 BAME (Black, Asian and Minority Ethnic) players.