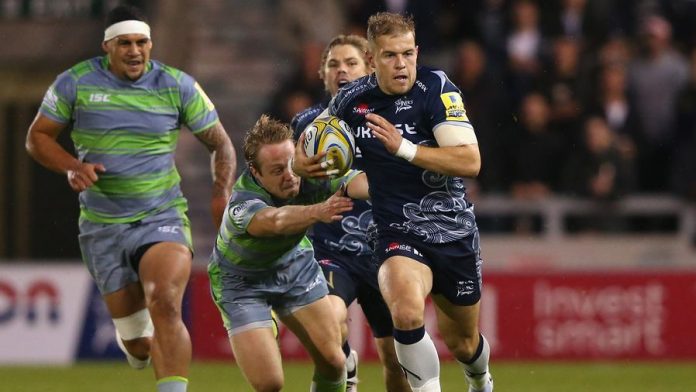 Sale skipper Will Addison says he and his colleagues are eager to put the record straight when the Sharks play host to London Irish at the AJ Bell Stadium on Friday (kick-off 8 PM).

Last week’s opening home game of the new Premiership campaign ended in disappointment with Sale being edged out 13-12 by Newcastle Falcons despite the Sharks dominating the majority of the action.

The Exiles were promoted back to the top flight in the summer after a season in the Championship and have made a positive start to the new season, beating Harlequins on the opening weekend and then competing hard away at champions Exeter last Sunday.

Not surprisingly, Addison says he and his team-mates are expecting another huge challenge against Nick Kennedy’s side.

But the Sale centre is also adamant there will be a positive reaction from the hosts as they look to kick-start their fortunes after two losses in the opening fortnight of the campaign.

“I think the feeling is we just need that first win to get everything going,” said Will.

“We came in on Sunday and got the post-game review out of the way and so far we have had a really productive week.

“Everyone is just eager to put last Friday behind us and to try and get that first W at home and we’re confident we can do that.

“What was frustrating on Friday was that we didn’t convert the early pressure we had. We played some really good rugby in the first 20 minutes but we just didn’t convert that into points and that’s where we need to get to.

“We just need to get into that really consistent productive mindset of competing in the opposition 22 and converting our gains into points.”
“Everyone is just eager to put last Friday behind us and to try and get that first W at home and we’re confident we can do that.

“We just need to get into that really consistent productive mindset of competing in the opposition 22 and converting our gains into points.”

Sale’s cause against the Falcons wasn’t helped by a line out that, uncharacteristically for the Sharks, struggled to catch fire.

But rather than seek to play the blame game, Addison believes Sale’s sense of collective responsibility will ensure the team learn from its mistakes and kicks on.

“Looking back to the Newcastle game, I also think our cause wasn’t helped by our inaccuracy at the set-piece,” the Sale skipper added

“When we get into that 22 we want to be really accurate and, hopefully, we’ll rectify that very fast and come Friday it will be a different story in the early parts of the game.”

“We are such a tight bunch that when someone does let themselves down they feel like they have let the team down which is an added pressure.

“No-one is shirking blame, everyone wants to take ownership. It’s been a positive early part of the week with guys taking ownership of what happened on Friday and wanting to change it this weekend.

“It’s a great challenge to be at home again and playing against a team that is totally different to the last time we played them back in 2016.

“London Irish are a better team than they were last time they were in the Premiership so it is going to take a really good performance from us all but it is a challenge that we are looking forward to.”

Tickets for the London Irish game are available HERE

Sharks McGuigan gets the Scottish start