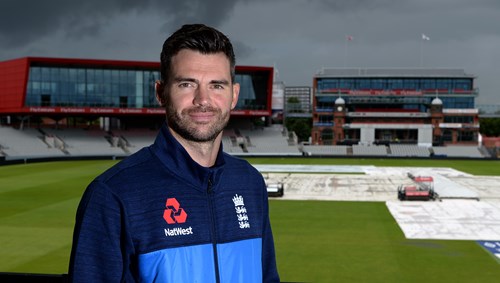 The Pavilion End at Old Trafford has been renamed The James Anderson End at Emirates Old Trafford ahead of the Fourth Investec Test Match between England and South Africa, which started this morning.

The 35 year-old is England’s leading Test wicket taker with 480 dismissals and is rated as one of the world’s best pace bowlers, with his mastery of seam and swing rivalled by few others. In fact, no other current bowler has more wickets than Anderson, nicknamed the Burnley Express.

Anderson made his Lancashire debut in May 2001 and went on to take 50 First-Class wickets in his first full domestic campaign the following summer before being awarded his County Cap in 2003. The fast bowler was also part of the Lancashire squad that won the County Championship for the first time in 77 years, in 2011.

He was awarded his first central contract by England shortly after taking five wickets on his Test debut against Zimbabwe at Lord’s in the summer of 2003 and has gone on to win three Ashes series in 2009, 2013 and 2015, the first of which coincided with him being named as one of Wisden’s Cricketers of the Year in 2009.

The Lancashire bowler has also featured in the 2007, 2011 and 2015 World Cups and the Burnley-born star sailed past Sir Ian Botham’s England record of 383 scalps in the game’s longest format against the West Indies in April 2015.

Chairman of Lancashire County Cricket Club, David Hodgkiss OBE, said: “James’ contribution to both Lancashire and England Cricket over the last 15 years has been immense and we felt it right to take this unique step of recognising all that he has achieved in the game.

“Everyone at Lancashire County Cricket Club is hugely proud of James’ unique bowling achievements both for the Red Rose county and for England, as the country’s all-time leading wicket taker.

“In recognition of a fantastic career thus far, the Club is delighted to honour his success by renaming the Pavilion end, the James Anderson End.

“James will go down as one of the greats of the game and we’re very lucky to have him playing here at Lancashire where he continues to perform and wear the Red Rose and England jerseys with great pride.

“I would like to thank the Lancashire Members for their input in the process as they voted in a Club survey last year as to which players should be celebrated at Emirates Old Trafford, and James, alongside Brian Statham, were at the top of the list.”

Lancashire and England fast bowler James Anderson added: “I am completely overwhelmed and honoured that the Club has renamed an end after me at Emirates Old Trafford. It is an incredibly proud moment and one that will live long in the memory.