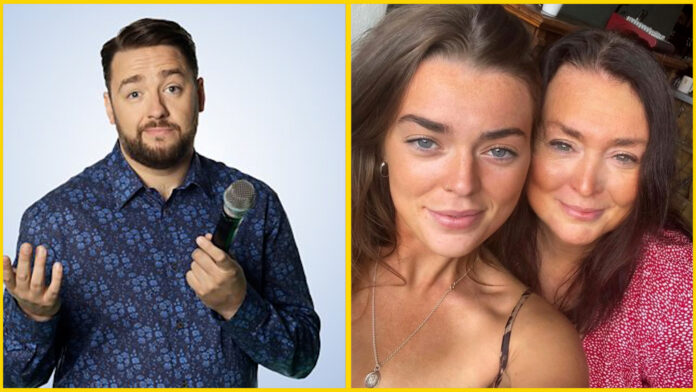 Comedian Jason Manford is set to perform a live stand-up comedy show at The Oast House in Manchester in memory of his long-time friend Michelle Mullane – a former XFM and Key 103 radio presenter who recently passed away from bowel cancer at the age of 50.

The ‘Howl for the Bowel’ open-air show will take place on Easter bank holiday Monday next year –18 April 2022 – with profits from the ticket sales going to Cancer Research UK.

Jason will be joined at the festival-style event by a host of big-name support acts from the worlds of comedy and music, to be announced over the coming months.

There will be a limited number of tickets available for this exclusive and intimate event. These are priced at £35 and will go on sale at 10am on Wednesday June 9th.

Jason first met Michelle over a decade ago when she invited him onto her radio show ‘Michelle Around Midnight’ to chat about his up-and-coming comedy career.

Michelle, who lived in Alderley Edge, was a familiar voice across Manchester’s airwaves as she hosted lively talk shows on both XFM and Key 103, along with making regular appearances on BBC Radio Manchester.

She and Jason struck up an instant friendship and remained great pals over the years, staying in regular contact and catching up over a cuppa whenever they were able. To this day, Jason still credits Michelle with giving him his first big break on the airwaves and helping him to carve out a successful career in comedy.

Jason said, “Michelle was such a dear friend and helped me before I was anyone. She gave a lot of comedians their first chance of being on the radio and all my times I spent with her I only remember laughter. So it feels fitting to help put this show together in her honour.”

Sadly, Michelle was diagnosed with incurable bowel cancer in summer 2019 after being rushed to hospital with severe stomach pains. She was referred for emergency surgery and received ongoing chemotherapy treatment at The Christie.

After a bravely fought battle, she passed away peacefully on Christmas Eve last year with hundreds of people – including former colleagues and celebrities like comedian Phil Jupitus, Britain’s Got Talent star Steve Royle and BBC Radio Manchester’s Phil Trow – paying tribute to her.

Michelle began planning ‘Howl for the Bowel’ with Jason before her death, but when the gig was postponed due to Covid-19 she remained determined that it should go ahead even in her absence.

The event is being generously sponsored by aps Media & Events, who are also producing the show, and The New World Trading Company, who own The Oast House in Spinningfields.

Michelle’s daughter, Liv Winter said, “I am thrilled to be able to announce my mum’s pride and joy – Howl for the Bowel. She worked extremely hard on this event despite being so poorly and I am honoured to continue her legacy. The fact it’s happening on her birthday makes it even more poignant.

My mum made me promise the event would go ahead no matter what, so this big announcement is for her. Everyone involved in this project wants to make my mum proud, so we can’t wait to reveal the rest of the line-up over the coming year.”

Chris Doyle, Relationship Manager at Cancer Research UK commented, “Michelle was an incredible woman who always had a smile on her face. Despite the challenges of going through cancer treatment, she was determined to support others affected by the disease and was passionate about raising awareness of cancer and the research behind finding a cure for it.

Last summer, she also backed a campaign to help raise vital funds for Cancer Research UK during the pandemic and helped to raise awareness of the impact of Covid-19 on future research into the disease. Her commitment and loyalty made a unique contribution to the progress we are making.

Every year around 42,000 people are diagnosed with cancer in the North West and one in two people in the UK born after 1960 will get cancer in their lifetime. By supporting Howl for the Bowel you can enjoy a brilliant afternoon of entertainment while knowing you’re doing something extraordinary to help beat cancer.”

Julie Chatzkelson, Managing Director at aps Events & Media added, “We are delighted and extremely proud to be involved in staging such a poignant event for Cancer Research UK, now in memory of our dear friend Michelle. Just over 18 months ago Michelle and I met up for a cappuccino or two, to discuss with great passion an initial plan for the event. Due to Covid the event, which was due to take place in July 2020, had to be postponed and sadly Michelle passed away before we were able to set a new date.

But Liv’s promise to her was that ‘the show will go on’ and we are thrilled that have been able to secure 18th April 2022, which is Michelle’s birthday – and we will sure have a party to remember!”

Tickets for the ‘Howl for the Bowel’ live event are available here.