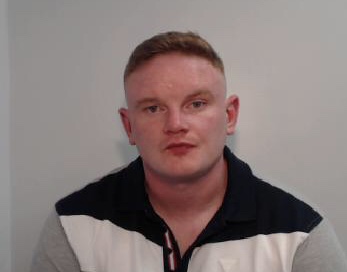 A Stockport man who assaulted a police officer as he stormed off a plane after hurling abuse at a flight attendant has been jailed for nine months.

Twenty two year old Joshua Kilpatrick was sat on a plane at Manchester Airport, waiting for the flight to leave for Rhodes, when he was overheard using foul language and swearing loudly.

When a flight attendant approached him and asked him to be mindful of his language given that there were children on the flight, Kilpatrick responded by becoming aggressive and continuing to swear.

After the issue was raised with the captain, the air bridge was reattached and Kilpatrick was asked to leave the flight. After initially becoming apologetic and asking to remain on the flight, he again became aggressive and remarked to two police officers that they ‘better get more mates’, seemingly signalling that he had no intention of getting off the plane willingly.

As the situation continued, Kilpatrick began shouting vile insults at the flight attendant as he stood nearby.

Eventually he agreed to leave the flight, but not before pushing one of the police officers present as he stormed off. He hit the man with such force that the officer suffered a full thickness tear to the rotator cuff.

Detective Sergeant Alex Wild, from GMP’s Manchester Airport CID, said: “Kilpatrick’s actions caused other passengers distress and needlessly gave many of them a rocky start to their holiday.

“Not content with just swearing loudly on a plane full of children, he then decided to start hurling abuse at a cabin crew member before getting physical with police.

“The judge remarked during the hearing that this was a deterrent sentence imposed to act as a warning to others about behaving badly on an aircraft. I want to echo those words and hope this will send a clear message that this kind of behaviour will simply not be tolerated.”

Police hunt for prisoner who escaped while being treated at hospital