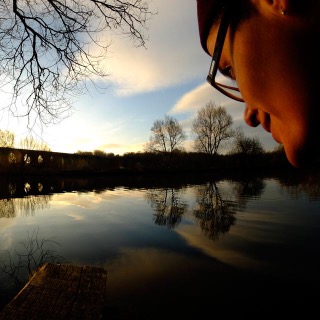 A Levenshulme artist is holding an exhibition of photographs taken during a year of running in her local area – to highlight the benefits of physical activity and artistic expression for mental health
Photographer and animator Tamzin Forster started her project as a New Year’s Resolution in 2016 and credits her creative combination of running and photography with helping her to combat stress.

Tamzin runs in her local area, taking in green spaces like Highfields Country Park and the Secret Lake – and records her journey with a photo of a scene which inspires her each time.
“Everyone is different, but combining photography and running really worked for me. It helps to stop the stress levels from rising”, said Tamzin, who has completed more than 100 runs, since New Year’s Day 2016, including the Manchester Half-Marathon.

“There’s lots of scientific evidence that physical activity, art and talking all really help.
“Running helps me to get active and to connect to other people through my local club, while taking photos each time I go out has helped me to learn new artistic techniques and to take more notice of my surroundings – finding the beauty that exists in our urban area.”
The idea for the exhibition, which opens at Central Library on Saturday 28 January, came after Tamzin heard about a ‘Run and Talk’ event organised by Manchester City Council and England Athletics in October.
The event was set up to encourage more people talk about their mental health issues and to break the stigma attached to such conditions. After the event, Manchester running groups and clubs including Manchester Harriers, Didsbury Runners and Manchester Frontrunners appointed their own club Mental Health Ambassadors.

Emmeline tops the poll at the Great Northern